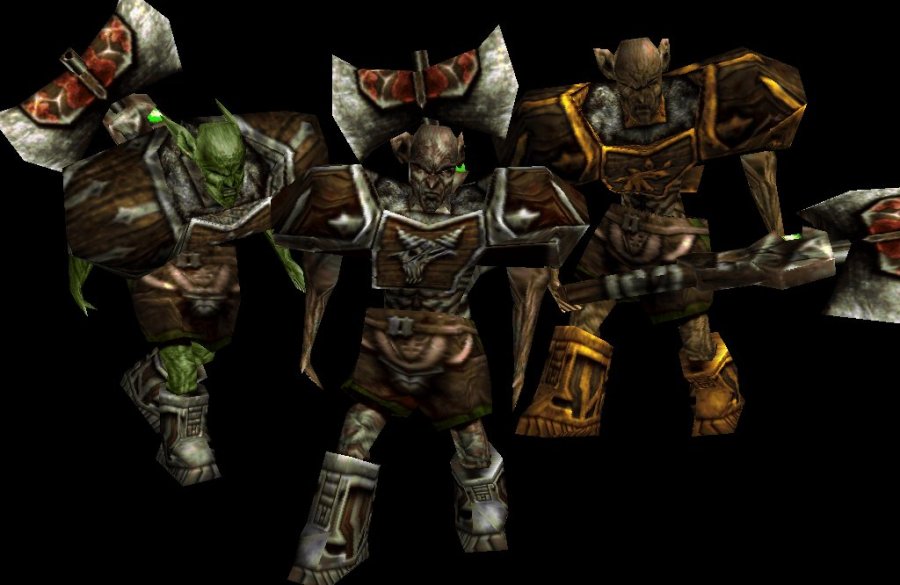 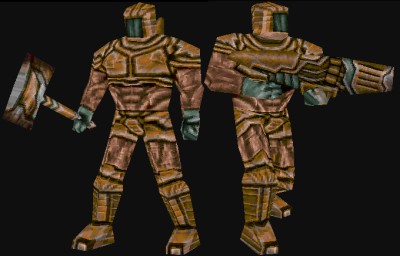 Darven: I wanted to make another Quake skin, and I have no idea what the name means.

Space Marine: This is not a clan skin, it was a test skin I made for a a game I was working on, but the game died due to the the runner being a dumbass. 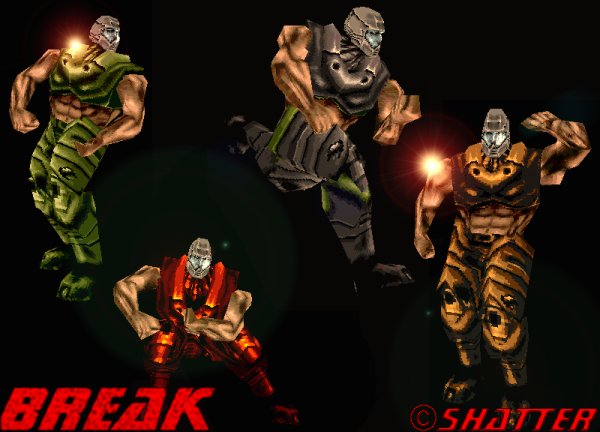 Break: I felt as though I needed a skin with a bunch of pipes, and I wanted to make a DOOM-like skin. That’s were this skin came from.

This is a skin I call Floatilla (cause his armor looks like a life vest), I just made it to help learn the Q2 player model/palette better, and to show off my new arms, and a face. :)

I made this skin really just to give that face I made a home, but I did need more pracitce with the model, etc. 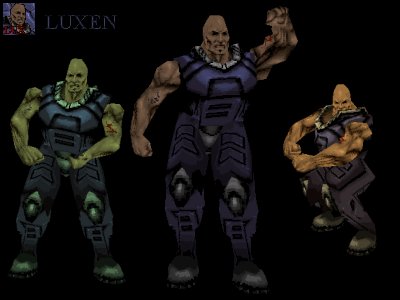 Skin Comp Winner: If you don’t know, I held a skin comp a while back were I gave away a 1st place skin.

Peter’s Borg Skin: I’ve wanted to make a borg skin for Q2, but I haven’t had the time. So when someone asked for one I was glad I would get to make one. 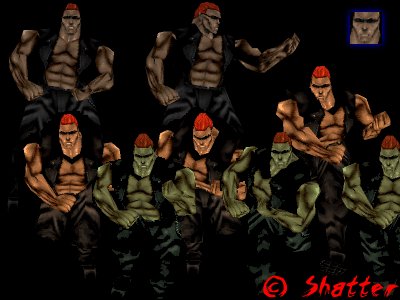 If you see this skin anywhere else as Anthrax by someone else, it’s just the guy I made it for being a dumbass and saying he made it. Made this skin to be a little something different that the normal I guess. No armor or pipes, so that makes it really different. ;) 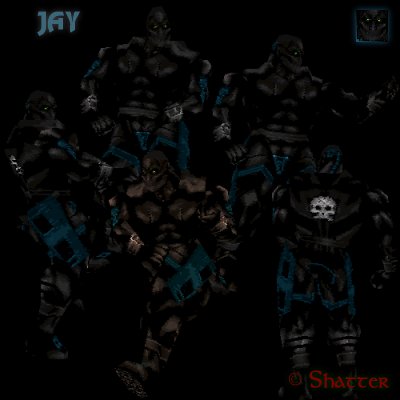 Another one for our friend up in Canada, Jay. People always ask for something dark, or just different lately. Kinda cool in a way cause I’m not just drawing tech skins over and over.

Jan 6, 2001 wow. I really never update, do I. blech. here’s a few pics of new models, just to show that I haven’t been doing nothing. first, a modification of the Deadpool mesh, to give him Huge-Muscle-Guy proportions. not sure what I’m gonna do with this yet. I’m working on a Tribes 2 mod at the moment that I’m probably going to end up using this as a base for, though. 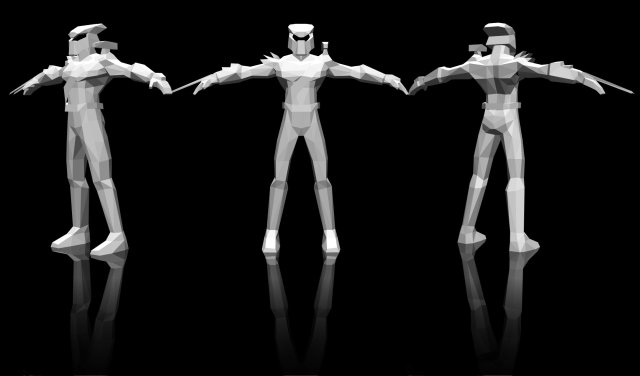 next up, another deadpool mod… the Predator! I know that proportionally it isn’t much like him.. I’m probably going to fix that. also, he doesn’t have his dreds. that’s still to come. I haven’t touched this one in a while, but it’ll get done, honest. :P image below. 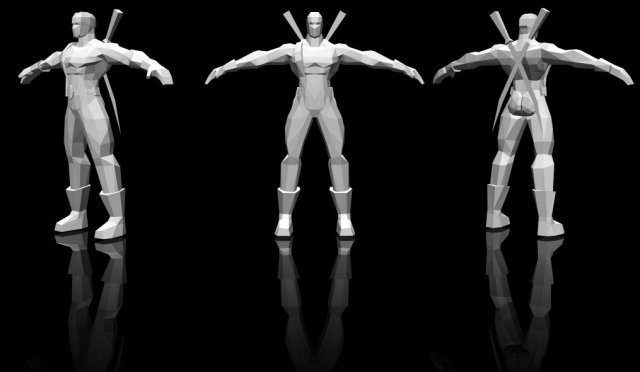 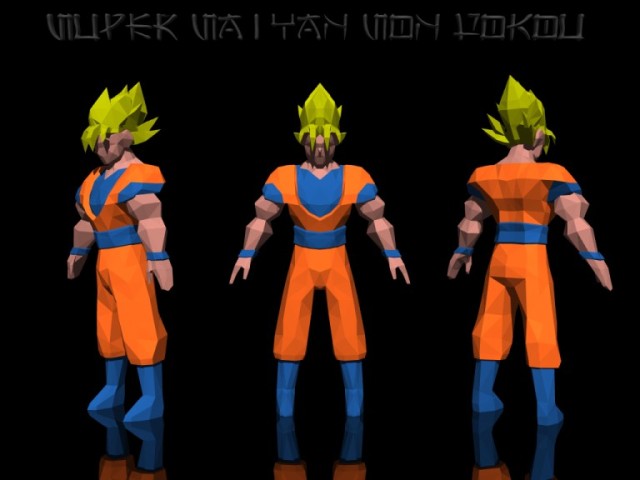 January 6, 2000 – Sorry I haven’t been around much, I’ve been busy. Here’s what’s new: Super Saiyajin Gokou from Dragon Ball Z.

I’m busily working on the HH3 mod for Q3 alongside the great Rorshach, 6ixes, ALPHAwolf, Jason Seip, and others. Also been working on a game called MetaHunters for Night Interactive, and I’ve been working for someone professionally (not fulltime) doing various models and animating them for him. Also been finishing up TWO (count em, TWO!) Q2 PPMs, one that’s my model and one that isn’t.

Past that I’ve been busily working on schoolish things, playing with my new cable modem and my new computer that I got for Christmas, and playing Unreal Tournament and Q3. Those are both great games, why compare them? I love them both, and play them daily.

As for showable eyecandy, let’s see what I can do for you guys… 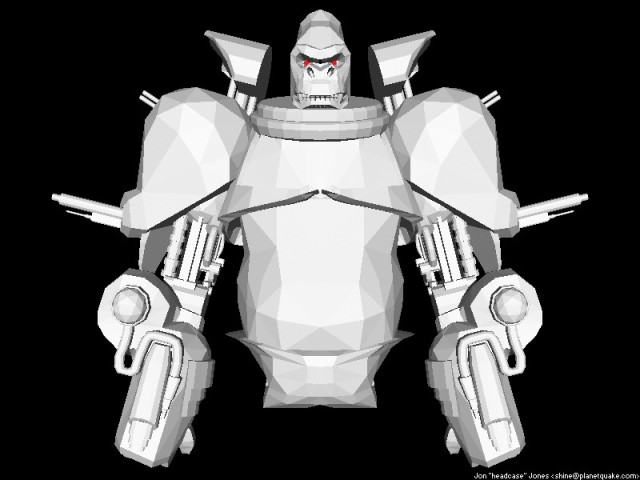 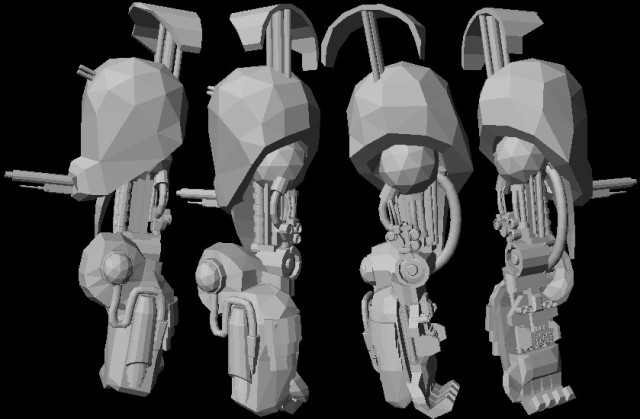 Cain from Robocop 2. I did this for cash, for an Unreal mod no one will ever see. Enjoy the view… that’s all you’ll ever see of him. :\  Shine 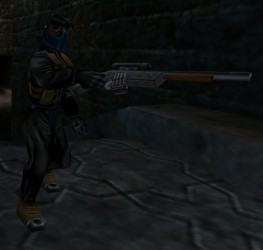 October 14, 1999 – Namacer is out. He’s the model that I got 2nd place in the Action Quake2 modeling contest with. I’m not that pleased with him, I’ve done better, but here he is for those of you who want him. The prize was $50 and a signed copy of Half-Life. :) I got the copy of Half-Life and an Everglide Half-Life mouse pad from Suislide this past Monday, which was cool, he’s a nice guy. Anyway, here’s the PPM. 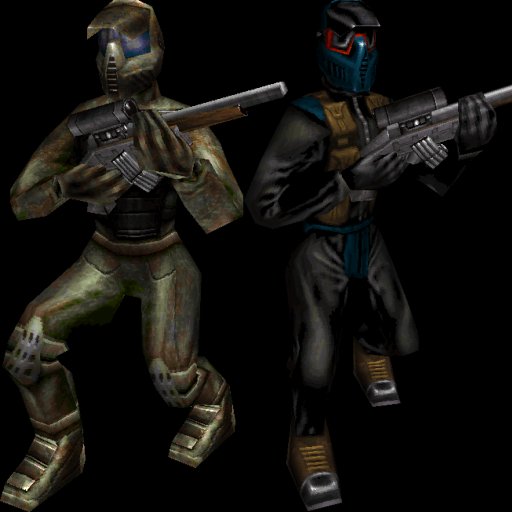 Thanks go to Chris Holden, Burnt Kona, and Necrohunter for their skins, and an additional thanks to Burnt Kona for also doing the skinmapping. Also, I updated the ‘Latest Stuff’ bar with two new things.. sort of. A new male model I’ve done that I’m happy with so far, and two new shots of Jar Jar. Enjoy!  Shine

Man oh man, did the droid ever go over well. :) 2000+ downloads from both Q2PMP and this site, that’s incredible! Just so you guys know, I’m still working on a Jar Jar model.

Also new, with the help of Chris Holden and Burnt Kona, I got second place in the Action AQ2 Modeling contest with my upcoming Namacer PPM. :) Congrats to Conrad, EvilB, and Rikki Knight for doing so well in the contest. Oh, about the PPM, Namacer, I’ll be releasing him as soon as I get a skin from Necrohunter, an excellent artist I’ve been working with on a project for one of the teams I’m on. Go visit his site, it’s a great place with some really nice work. Email him words of niceness. :)  Shine 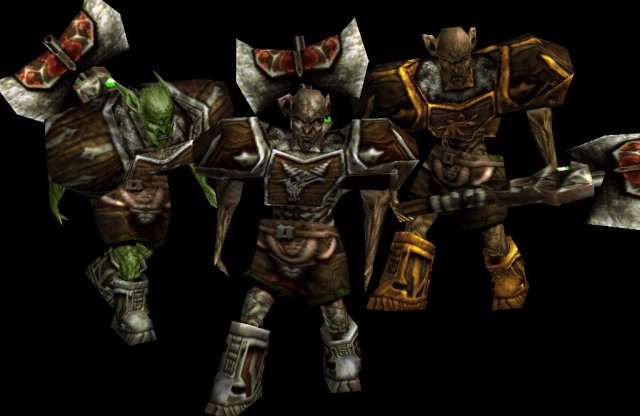 Here he is… NORE!! go download him HERE!. :) he’s my latest Q2 PPM, as skinned by the brilliant Chris Holden. 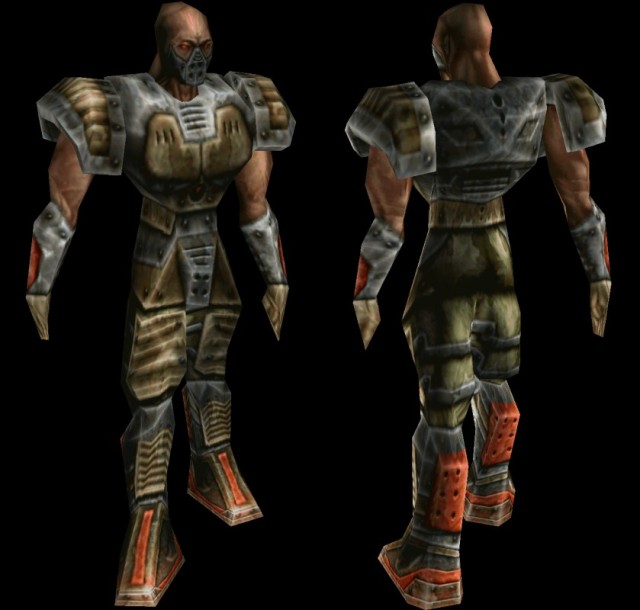 Here’s a pic of my next upcoming PPM for Quake2, the BaronVAC. He’s exactly 666 polys with the gun, a total coincidence, I assure you. :)

What was to be the player model for Night Interactive’s upcoming RPG, Liberation(c). I used the point-by-point technique I used on the horse (see below). I built the model in five days and I’ve begun to animate it. :) unfortunately, the bums decided they didn’t like the body, then they decided they didn’t like the head, either, so I’m redoing the whole model. I’ll post it someday… you’ll know it when it’s here.

A horse I’ve modeled for Stand: the Merge of Powers that has since been given a place in the Liberation RPG. Each point on the model was added by hand then sets of points were converted to polygons. This is my first model I’ve used that technique on and I must say, I’m never going back to primitives. :) It took approximately 13 hours to build this model.

Another model I’ve done for Stand: the Merge of Powers. Also another model done point-by-point.

This is a fun little model I made from a sketch by one of my good friends. It turned out nicely, I thought. I was going to make this a Quake 2 player plugin model but never got around to it. He weighs in at 786 polygons.

This is a model of a strange helicopter done from a concept sketch by my good friend Shinobu. The model took at least 10 hours to complete. The original unoptimized model (not shown) had nearly 1000 points, each one of which was added by hand. This was to be for the Liberation RPG but legal things happened and it won’t be in the game.

This is a model I did before I did the model shown above. I’m not sure what to do with this model. If I find out that it won’t be used in the Liberation RPG then I’ll put it up for download. 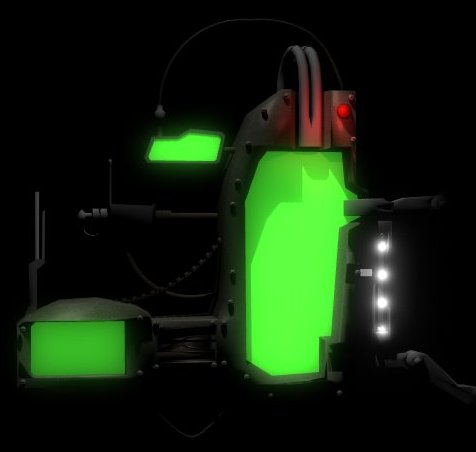 This is a work-in-progress shot of a bizarre-looking futuristic console I’m modeling\rendering\texturing by myself, in Lightwave. This is just a demonstration of the lighting, just to see if I like it. I’m still working on the textures and such. The model is approx. 9,000 polygons. This is the lighting demonstration. 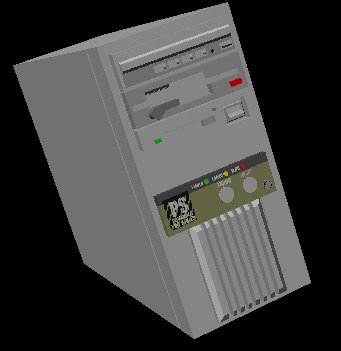 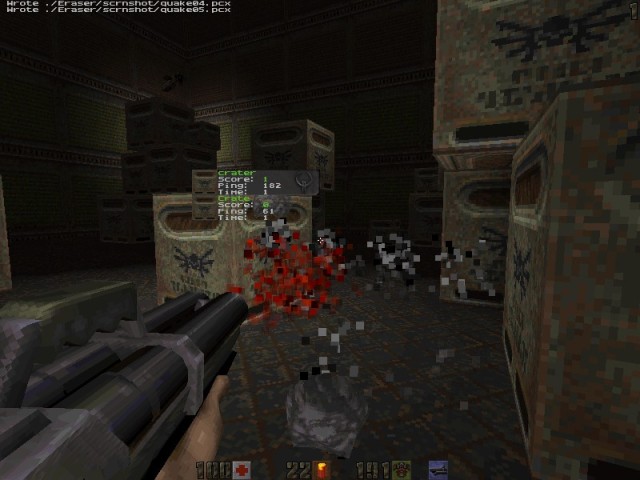 CrateDM pits opponents against each other in a room full of crates, and the players are crates. Later on one day, I was experimenting with some PPM stuff while I was working on a new one, and I made a crate ppm. Now, this was just for testing things in the way of ppm creation, but I laughed my ass off watching it move around the map. I considered the possibility of DM one on one with both players using this crate ppm in a map with a lot of crates, thus you could spot running and “blend in” so to speak. I didn’t really see any of the q2 maps that had the number of crates that I was looking for, so I spent around less than 20 minutes and tossed together a single room map. This room was just a large room with a LOT of crates and weapons/items.

I sent the mod over to a friend and we played for several hours having a great time with it. The gameplay was insane, since the whole time it’s just funny to see a crate sliding around the map, and then when you’re mid battle, all of the sudden, your opponent disappears. It was extremely fun and creepy, so i figured, why not release it? But first of all, I warn you, this is VERY simple, I made this entire thing in under an hour, the crate ppm is nothing more than a crate, period, don’t expect anything flashy in this. It’s just good fun with a dumb idea. :) 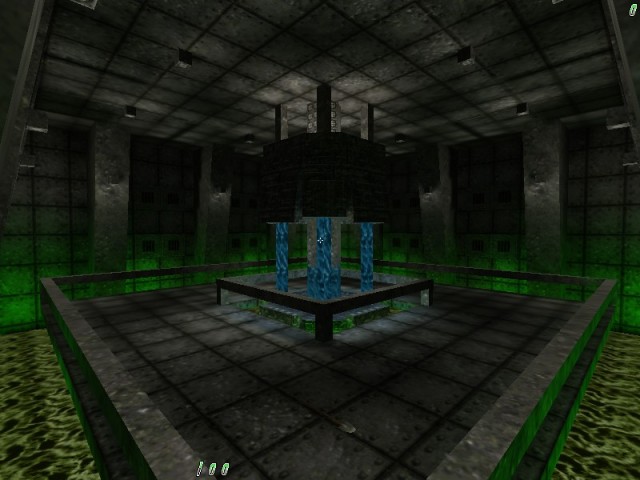 My other Gauntlet map, Old Core. This requires the Gauntlet q2 mod to be played properly. 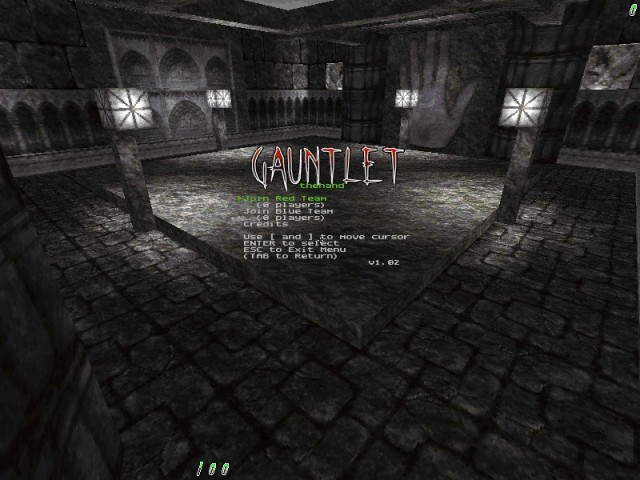 My Gauntlet map, The Hand. This requires the Gauntlet q2 mod to be played properly. 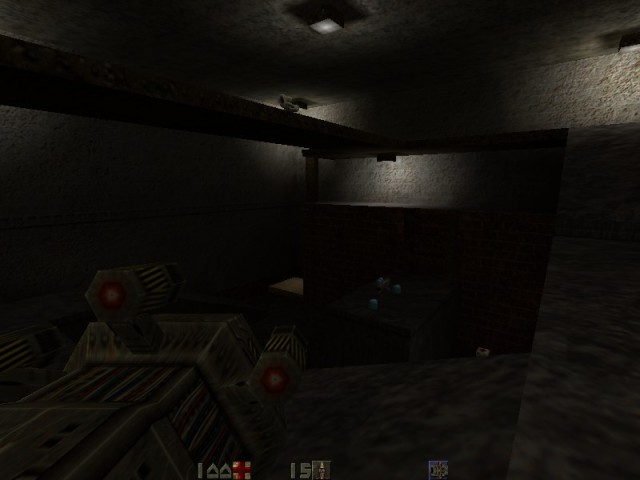 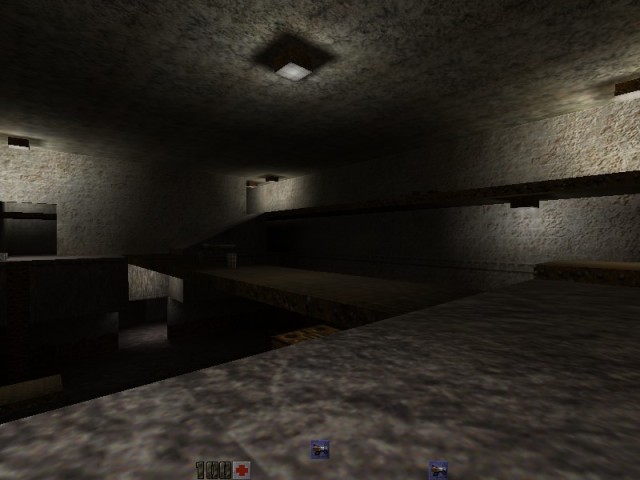 Indoorain is yet again a nice tight fast flowing DM map like Neverfly with all new textures. This was first released in the Stand:tMoP DM map pak, but now you can download it on its own. This map is darker by request. 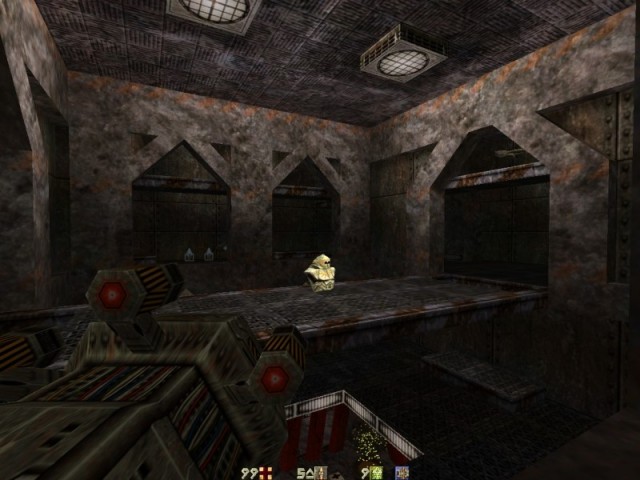 Midpipeline, this map is larger than Neverfly, and the theme is more like that of an old factory or parking garage. 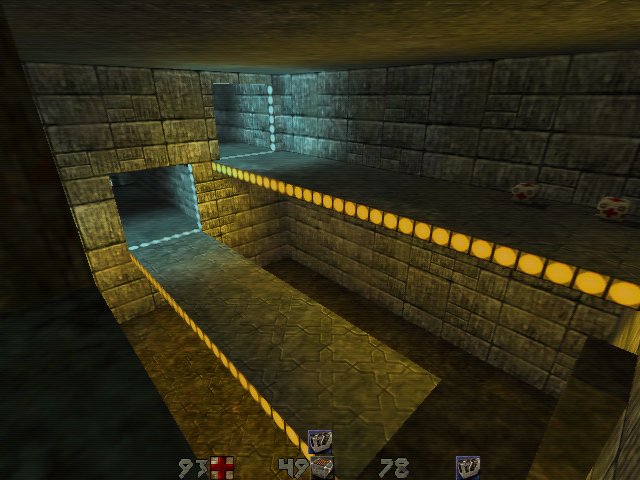 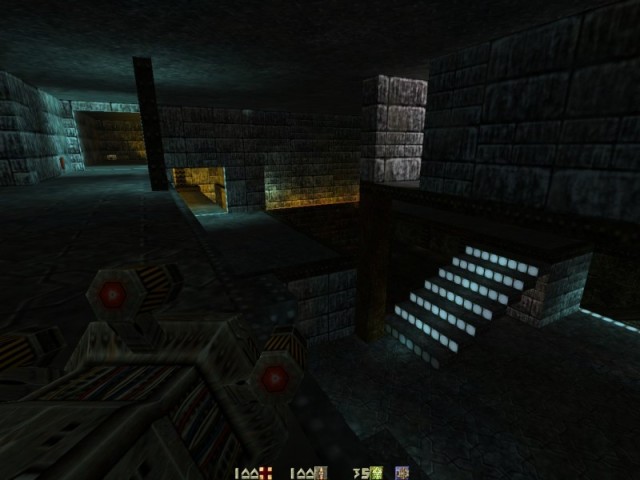 Neverfly, this is my first released map, it’s small and fast-paced, a very fun map to play. You can read a review of it here (a very good review :).

How a skin gets in here: How that I have made my good awards show how to make a skin, I find it best to show how NOT to make a skin. I have many more that could be put here, but I have narrowed it down to the worse. More will be added with time. I hope that someday I will be out of this community so that I will not have to worry about this kinda crap.

It’s just too goofy to be called a skin. There is a huge lack of effort, and there is no model regonition.

Ripoff, uses one of Rorshach’s skin’s head, the Quake 1 player skin, and parts of the Protofiend skin. Rmember folks, if your going to make a skin make it YOURSELF!

A classic skin that was ripped off in the days of QW, now ripped again and converted to q2.

What can I say, it’s just so damn sloppy I had to add it.

Just a recolored version of my Floatilla skin with some one colored blood drawn on it.

Wow, I had no idea someone could rip-off PartyCrasher, DireProtoFiend, 666, and Adrian Carmack at once!

I have done textures for many projects, check out Stand, Gore, Zaero, or HacX2 to see some of my texture work. Shatter