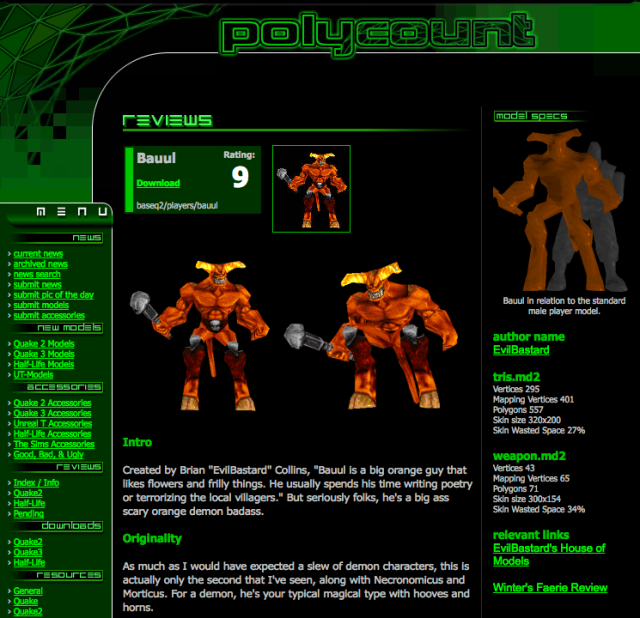 As much as I would have expected a slew of demon characters, this is actually only the second that I’ve seen, along with Necronomicus and Morticus. For a demon, he’s your typical magical type with hooves and horns.

The model is very well done, and uses it’s mere 628 polys very well, managing quite a bit of seperate muscle definition. I have a feeling Brian was shooting for a lower poly count than his last model Sydney, because it was criticized for having a high poly count (I wouldn’t have criticized Sydney personally, she’s under 800 polys, and that’s all that matters), so I was left feeling that the model could be much more refined given 172 polys more that could have been spent and still staying under the 800 limit (Brian is probably cursing us now). But, for 628 polys, it’s definately much better than your average Q2 ppm.
Score: Eight

This is where I feel the model really shines. Brian used Lightwave and Puppetmaster for the animation, and it really shows. Use of bones and inverse kinematics and such really makes the distinction between a professional looking product and the rest (that’s why I’ve personally been slaving to learn Lightwave recently), and Brian makes good use of the tools at his disposal.

The animations are all fluid, and ooze with demon character. The stand sequence has this crazy confidence to it, and the run has this exaggerated leaping quality that should be quite scary to see rushing at you in the game. Brian gets inventive with such things as Bauul throwing out a large magical symbol for the taunt, or shrinking down to a disappearing whisp on a death sequence.
Score: Ten

Bauul doesn’t come with his own sounds, but the default male sounds should be just fine.

Bauul supports VWEP, by having multiple copies of it’s weapon model (a magic staff/wand), so no diaper effect.

Bauul is eligible in all respects.

“I love this model so damn much!!!!! I just had to do a skin for it! Stripping the flesh off your bones” Graphite Shark, author of Bonestripper for Bauul

“Do you have the blues,well time for a HIT of mother nature,while wishing I had a bud I could spend some time with this is all I could come up with,so have a bauul,and TAUNT your buds with THC.They taunt me,so do the same back,catch my drift,hehe.” Donald Sarty, author of Hit420 for Bauul

“Borne of blood and warrior pride rose a daemon that hunted men for their souls. He kept their luminous essences inside the skulls. At the battle of evermore he had magic runes carved into his chest and back by a mistress of magic to ward off his foretold doom. To maintain balance and order throughout the land, assuring that he would not unbalance a world altering war, they placated him and he withdrew from combat to lay with the beautiful lady slumber. Bloodshed in a far off world has called him back to consume souls. The runes that snake his cracked daemon flesh now aid him in his quest for trophies.” Matt, author of Skull Collector for Bauul

” I’d like to say thanks and hey to Brian “EvilBastard” Collins (brian@zono.com) he makes all these jaw dropping models that inspire me to do skins. My last couple of skins have basically been something to learn from. In these skins there’s a lot more talent shown and it looks good.” Halo, author of CTF for Bauul

“NEW SKIN by GunSmoke!” GunSmoke! author of Diablo for Bauul

“Do what ever you want with this. But please Email me.” David “Jerry Atricks” Baer, author of Demon Guard for Bauul 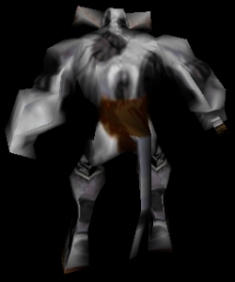 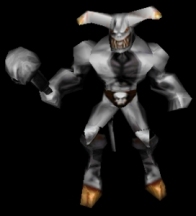 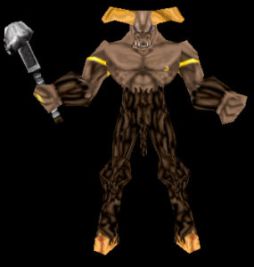 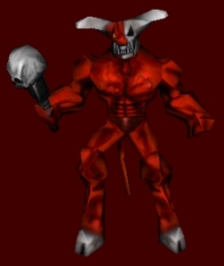 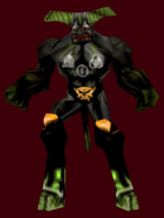 Q.U.A.K.E. Skins for Bauul by Frosty 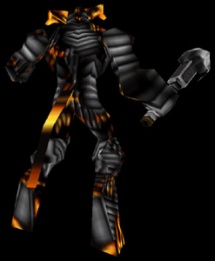 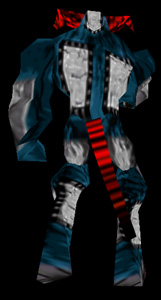 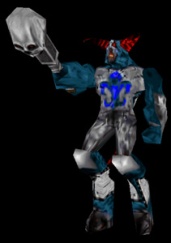 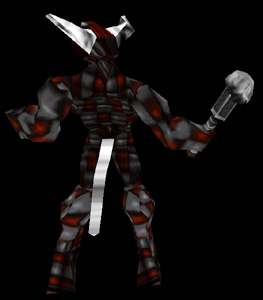 “Quick United Assassin Killer Eraserbots: These skins are mine and have been designed by me – I don’t copy other skinners but much inspiration was drawn from the following: The new POTW in UT skins – Kirin’s UT skins – skins off skindom, Rorshach’s SD Q2 skins, and his skin Doctor and my own deranged style & Steve Irvin AKA Massive Bitch’s Iron Maiden model. IF THEY OFFEND YOU THEN DON’T LOOK AT EM OR GOTO WWW.PROZAC.COM OR WWW.HERBALREMEDIES.COM OR WWW.METAMCILSWEETLAXATIVE.COM :} :] :[ :| :> :< :o. Then reload Quake2 and run them with ridah’s eraserbots playing the map Paradm3 or Conster etc..” Frosty, author of Q.U.A.K.E. for Bauul

Short Intro: Another set of skins done by that guy from the freezer, Frosty. His next victim is Evil Bastard Collins’ Bauul model!

Good Stuff: Coming from Frosty, it ought to be for his deranged style of texture-skinning. Gotta love it! ^_^ I can see where his inspiration is from, according to his readme. But I wonder where my Val, Kiwa, and Xenobia UT skins or Massive Bitch’s TopPick Valen Q2 skin come into play here? Hmm … o.O Anyway, some good things I can point out in these skins are that they are all quite unique. A little deranged, like a majority of Frosty’s skins, but unique. Also, the difference between skulls are high upon the various skins. I don’t see the same skull used in the other skins. My personal favorite in this package is Basto because of the red swirl-like effect but Bastille looks nice because it’s the only non-team skin that’s not on fire. Frosty also added more of those skulls that he loves a lot on some of these skins. Maybe he has a thing for skulls.

Bad Stuff: They’re all great, but the red team skin doesn’t quite hit me … the texture is almost the same throughout the whole skin, thus creating a plain image in my head.

Suggestions: I can’t really help your deranged style of skinning since it’s not something that I can attempt in but I honestly think the red team ctf skin could be a bit more unique. It could use a few more skulls … in my personal reference anyway. -.^

Recommendations: Like most of Frosty skins, they’re deranged and they kick butt! I’d give them a 90 of 100. The CTF add-ins, the skulls and the various textures put this one up, but the red team doesn’t suit me. If you like these skins, then I’d check these out:

Another thing I heard is that Frosty might make his first UT skin in the future! … I wonder how it might turn out? (?.?)