“There is no one faucet of this medium that is not boiling over with possibilities. The real-time playback aspect, the packaged content aspect, the neo-production possibilities, the high speed of technology advancement, etc, etc. – all that gravy.”

Ken Thain, director of the music video “Rebel vs. Thug” (Hanson 2004) in an interview for Machinimag.

Storyboard for Rebel Vs. Thug 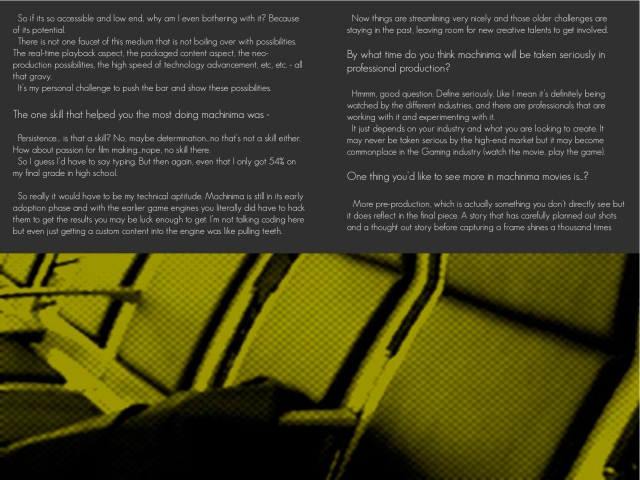 Riding the machinima bus has been a very cool ride. I’ve achieved great successes, both personal and otherwise, that I may not have seen if I hadn’t hung out on this bus. But today I feel like noting some of arguably the biggest controversies I’ve witnessed within machinima’s child like development over the last 6 years.

In the early days there was many heated discussions validating if machinima was ‘real’. Were we just playing with games? Was there any real advantage to doing machinima over traditional animation or filmmaking. With every other new person interested in machinima came the question, ‘Ok, I’ve heard of this ‘machinima’. Now convince me I should spend my time doing it over other mediums’. The thing about this one is the discussion still hasn’t ended. Many have steadfast over their reasoning for sticking with machinima and I think we are really just seeing the money now where our mouths once were.

I would have loved to be a fly on the wall when those two Scots came up with that one. And even when they had a new name for ‘quake movies’ that clicked, they spelt it wrong for (deity here)’s sake! Classic! But what the hell is ‘machine cinema’ anyways? As an almost scripted response to understanding ‘why machinima’ many suddenly wanted to rebrand it anew. I was not a fan of the name at all (I was always on the opposition), and spoke my peace in many of those discussions but there came a point, a point when The New York Times came an asking, and the Wall Street Journal came an asking, and Wired magazine came an asking and CNN came an asking. A point where we could have started calling it ‘sexotronic’ and it wouldn’t have mattered. The train had left the station and it was called ‘Machinima’. I still see the odd forum posts challenging this one, ‘what a stupid name’. Challenge all you want, I don’t know what the f’k machine cinema is but I sure as hell know Machinima.

This one was nasty. The Ottawa Animation festival is ‘the largest event of its kind in North America and one of the most respected animation events in the world’. Back in 2004 they opened the doors to Machinima entries, and this was a big thing. Machinima veterans such as Paul Marino, Friedrich Kirschner and Brian Mayberry, among others, flew out to represent their Machinima films and evangelise the technique. It was a big step in Machinima growth. I lived in Ottawa at the time and felt very honoured both to have these guys come to Ottawa and that the festival was taking notice. Then during the awards ceremony, when it came to the Machinima award presentation, this was given, ” “New and inventively weird, machinima straddles the line between visual fan fiction and filmmaking, a genre filled with potential for engaging complete visual expression. While the Jury does not wish to discourage filmmakers, we will not present a prize for this category as we feel the award needs to represent a certain level of excellence of expression. We hope to see more entries in future festivals”. At that point, those present representing machinima stood up and walked out of the ceremony. A silent but potent response. Needless to say the forums buzzed afterwards. Everybody had input. Even the conference organizer got involved, which was more like feeding raw meet to wolves at the time. Surprisingly enough, the stronger response was to stuff the conference submission boxes with more machinima the next year, rather than a FU response. This clearly reflected the strength of the community.

After the 2005 Machinima Festival a discussion came up regarding ‘A Few Good G-men’ by Randall Glass winning the ‘Best Virtual Performance’ award. Here the fence was based on this machinima entry having a soundtrack provided by a personal copy of ‘A Few Good Men’. Did the sound track give weight to the virtual performance created by Randall? Should the entry have been accepted at all since there was question of permissions? Would the festival happen at all if every permission had to be verified and double verified? The Intellectual property rights in machinima discussion still goes on and raises its ugly head(c) every so often but here was a case where it was really argued, for pages, and pages, and pages. I’m sure Randall threw his hands up a few times at this one.

5. ‘Machinima and the Women who make them’.

This one being the most recent and unfortunately the most tragic. With the preceding 4 controversies they centered around one place, a machinima.com forum. Everybody could provide their input, thoughts or choose not too and silently listen. At the end of the day, or days as some had it, we all walked away having said our peace. Many who opposed each other got past it and often found themselves sided on other controversal issues. But this particular controversy has made me realize something I had not previously. There is no machinima community any more. And I guess this may very well be a detriment to its own success.

I’m not going into the nitty-gritty, play by play of this particular episode, but I’ll share my perspective. A few weeks back I came across a posting on a blog about machinima that I found pretty fresh and invigorating. And in relation to this posting the author and I started exchanging emails back and forth on various topics. I really found her insight interesting and perspective intriguing and felt her input into the machinima community would be thought provoking. Shortly thereafter she made another blog posting. This one providing an opinion about the subject matter of machinima films commonly made by women. In the post she mentioned a top rated machinima film as a less than stellar example of her subject matter, and I honestly believe that had she not named this film I would not be writing these words right now, but it caused an ‘explosion’. Because in reality, her piece was an opinion, but as soon as she laid an example, that seemed to push the post into an attack.

And so it all painfully came down, albeit not in a community centered forum, but across websites, blogs, forum posts, comment threads and apparently personal emails. He said, she said, well you said, no you said, fuck you, fuck you too. But here’s the tragic part. The blog poster still continues to have to remove slanderous anonymous postings on her site, gets personal emails from multiple people full of negative statements and taunts, and constant notices of personal messages waiting at other sites that are filled with graphic words of hatred (WTF?). In hearing this I’ve poked around various open forums to see where all this has gone, only to find participants coming across like gladiators of roman conquest cheering and patting themselves on their backs for silencing an evil heretic.

So the controversy here is not the topic at hand, but the state of the machinima community that the topic has reared an ugly side of. It’s gone political. The community has splintered into factions that have their own social standings, machinima perspectives and agendas. And those factions are free to speak to and represent machinima however they wish, which is fine, to the point of mob like personal harassment for those who speak against them, which is not. The next great controversy will most likely arrive when factions begin to turn on each other, each touting they hold the holier machinima grail..And this one may become the bloodiest one yet, as we turn from open minds to oppressing elitist. And if one party can speak loud enough while others remain silent, it will begin to represent the whole, which, if this particular controversy is an example of, isn’t to the benefit of the greater good of machinima.

So this is why I list this as controversy number 5 in machinima. Not so much for the volume of discussion on the topic, but because the discussion speaks volumes to where machinima may be headed. 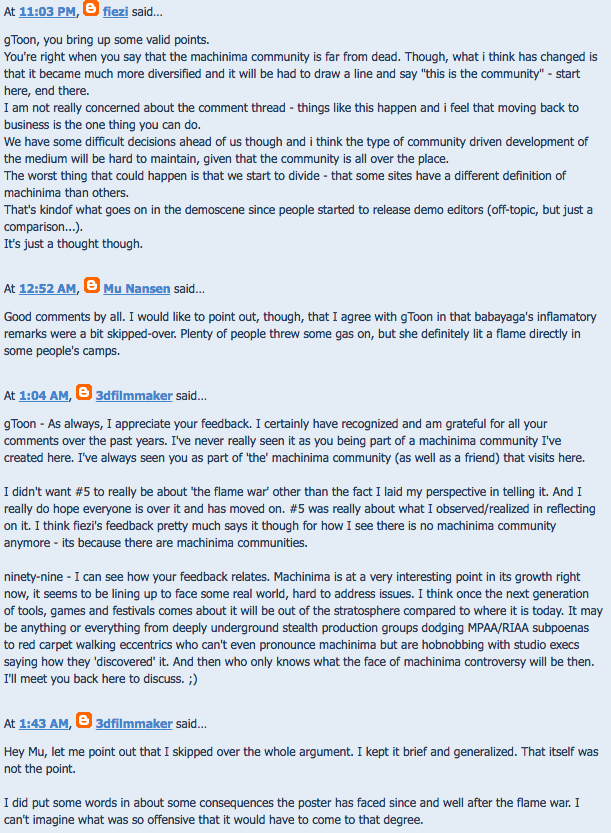 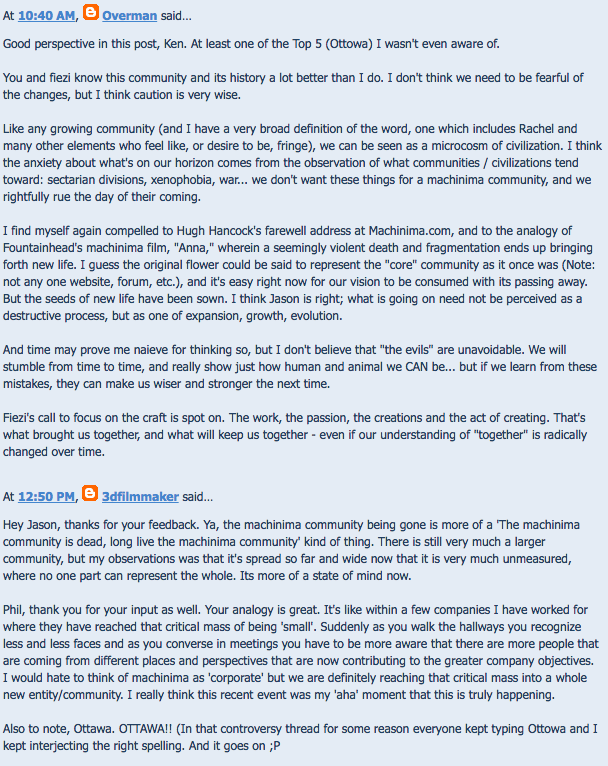