“‘Bouncers, Kebabs, and Ruby Murrays’, is a mouthful, but nothing stops you from calling it Bouncers for short ;-)” Dr. Nemesis

A surprise turn out for us, I submitted this to the 2003 Machinima festival just cause I could, only to find out later that it was nominated for Best Picture, and Best independent film. It didn’t win, though showed an interest in the film we previously didn’t know existed.

The sketch is about a guy trying to work his way past a bouncer and into “Club SD:NT” to spend his night but as you can tell from the pics he ain’t exactly dressed for the occasion.

We went for some new (new for us, anyway) techniques here, as we pushed the animation that step further ,and this was my first time actually making 2 models interact (fight) with each other . This is the first film to use our new tool, frame edit, which re-writes the animation list for actors used in the map. This makes it much easier to get new animations into the movie and we may not have bothered to make the film if we didnt have it. Also I tried my hand at a cheap volumetric lighting trick u can see in the third pic and finally it proves Lazarus actors are a good way to film. 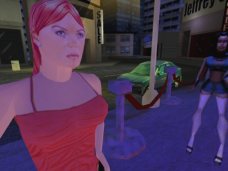 Binary Picture Show originally started as Stardate: Night Time. Founded to create films using Quake 2 because it had the ability to record during gameplay and save the data to a dm2 formatted file. The dm2 files can be edited to allow camera positions & angles and sounds.

Using this process we were able to create films out of those files and other short animations. This process has become known as: Machinima. Our current production is ‘Bouncers’, a film based on our popular ‘Bouncer Please’ sketches, featured in PC ZONE, and PC Gamer UK Magazines.

Dr. Nemesis is the founder of the project and he keeps the team together, he’s the writer, animator, and general coordinator. From the creation of the team, we have since developed our own engine that allows us to make our films more visually stunning, and allowing for easier creation of material. Special thanks to Ghostface, our coder, who makes the changes.

We have a wide variety of team members, each with their specialized area of expertise. PxWebDev – Maintains the website and any developmental aspects. He also does playtesting for the film and assist with final film presentation and compression. Blaze Benedict – is the lead modeler, and skin artist currently working on characters for Bouncers. Dreaded Kane – Our newest memeber, is the assistant modeler responsible for object modelling.

Aside from the people mentioned we often collaborate with artists for resources ranging from music to textures, to bring you higher quality films with every production.

Extras: Audio and Photos from Production of Bouncer, Please