The Words of a God: An Exclusive Interview with John Romero 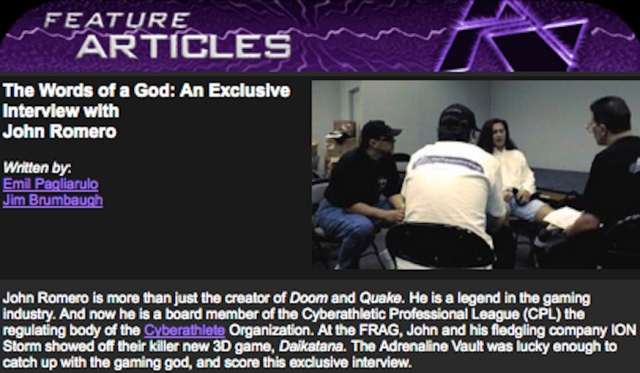 John Romero is more than just the creator of Doom and Quake. He is a legend in the gaming industry. And now he is a board member of the Cyberathletic Professional League (CPL) the regulating body of the Cyberathlete Organization. At the FRAG, John and his fledgling company ION Storm showed off their killer new 3D game, Daikatana. The Adrenaline Vault was lucky enough to catch up with the gaming god, and score this exclusive interview.

Jumping on BoardAVault: John, how and why did you join the Cyberathlete Board of Directors?

John Romero: I got an e-mail… (laughs) …from, I think it was Mike. Yeah, Mike Wardwell. He e-mailed me about it, and I was like, “Yeah, that’s totally cool!”  When I was still at id, it was probably two years ago, we had been talking about that, because some other people were interested in starting up a sport, a deathmatch sport or just a multiplayer sport. And that would have been cool, but we were way too busy doing other stuff. Everyone else wasn’t too much into it, because I’m the only one who really deathmatched all the time. So they really didn’t understand as much as I did! (laughs)

The Sport of the Future?AVault: What are your impressions of the FRAG, as compared to other Quake tournaments, like QuakeCon?

John Romero: It’s great. I like this venue (the Dallas Infomart) better than a little hotel. This is just a lot nicer place, and it’s bigger, and it’s air-conditioned, and there are no power problems. There are more people here than there were at QuakeCon. I think QuakeCon had something like 400 people — this is something like 600 people. It’s real airy here (12,000 square feet), which is good. You want room. You don’t want to be walking behind everybody’s computers, bumping into them.

AVault: In the past year we’ve seen Quake and 3D gaming progress from a hobby to a very real competitive force. How big do you think this phenomenon could continue to grow?

John Romero: It just depends on the amount of games released, and how standardized the rules get. I kind of predict some kind of outside governing body or whatever creating rules for tournaments, instead of just whatever Deathmatch levels are included with the game. Kind of like when the QuakeCon levels were created specifically for QuakeCon. So, any time there’s an event, there’s a special thing (map) that you have to learn, instead of just playing DM4 over and over. I think it would get bigger as the games get really popular. If Duke Nukem was really popular at this exact same time, it would be cool to have Duke tournaments, and have Quake tournaments. I mean, there were people who were great in Doom, and great in Descent, and that had their little tournaments, but they weren’t in a centralized location, which is really cool.

On DaikatanaAVault: John, compare Daikatana to other 3D games on the market. What’s so special about it?

John Romero: It’s more like, I think, Jedi Knight, because it’s got a pretty strong storyline, but it will actually have the story kind of woven into the game a little bit more than Jedi. Jedi did the same kind of thing that they (LucasArts) did with Dark Forces, where they have a level, then they have a cinematic, then they have a level, and they tie it all in with some cinematics. With Jedi Knight there was some text before each level. So you defintely felt like there was a really cool story, and you were moving through it. It felt like it was a lot stronger than Dark Forces. But Daikatana will have the same thing where there’s cinematics between levels, and rendered cinematics between time periods, and then within levels there will be cinematics. So you should feel more tied in with the story just because there’s cinematics within the levels, as well as everything that Jedi Knight has.

AVault: Why such a strong focus on storyline?

John Romero: Well, to make the single-player game more interesting, kind of like reading a book or whatever. In Doom, you know, you could play it from first level to last level. You didn’t care about story — you just went and mowed things down, and just tried to get better and better at it. But, you know, we’ve been playing a lot of Japanese console RPGs that just have amazing stories, and are completely story driven. We love 3D games, so we see the genre kind of moving towards that direction, going with the really strong story. But then, for replayability, instead of replaying the story part over and over, you play multiplayer games. So you kind of design two types of games, one that’s meant to be played over, and over, and over, and then one that’s meant to be played the first time co-op or just single-player. And then you add some variables, so you can play through it again using a different character or whatever. That way you can have the single-player game be played over and over, just like the multiplayer game. 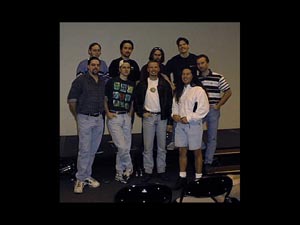 AVault: Are there any special challenges, then, when you’re focusing so much on the single-player game as opposed to the multiplayer game?

John Romero: Yeah, it’s definitely a lot more work to do the single-player game, because there’s all the cinematics and the story stuff and everything. You’re not going to have cinematics in deathmatch. (laughs) It’s just really hectic and really fast. I wanted to make the deathmatch cooler…I didn’t want to just have, “Ooh, strong storyline — deathmatch like everybody else.” I wanted to have deathmatch that was even cooler, you know where I kind of wanted to move deathmatch into having specialized attributes and stuff like that. So, you would go into deathmatch, and see different characters, running around with different attributes, doing different things, instead of just having everybody being able to strafe better. You know, or just rocket jump higher and better than other people. The best multiplayer game is where people can just change themselves from everybody else. You could have one guy that’s just blazing around…he might not be very good at shooting, that’s why he’s got to run away. So he maxes out his speed attribute so he can just run away from things. And then there’s the guy who’s just super-awesome with his aim, and he just pumps up his attack power speed and can just wipe people out. So people will be able to customize themselves based on how good they are. You should see a lot of different stuff — people just jumping like crazy, rocketing into people’s heads. You know, just doing their basic jump, which is probably as high as a rocket jump, but only if it’s maxed out…if you’ve maxed out that attribute. Just a lot of different techniques. And whenever you max out an attribute, you’ll be able to do something “special” with that attribute. Like if you max out your jumping, you’ll be able to jump really high, but you’ll also be able to jump higher if you hit (springboard off) a wall. So, with each one of those 5 attributes there’ll be something special you can do when you max it out.

AVault: Will Daikatana be as open to external modification as Quake? Is this important?

John Romero: Totally, totally. Yeah. I mean, the really important thing is Daikatana has so much content in it: so many textures, monsters, weapons, artifacts, everything. People are going to go nuts with all the stuff they’re going to be able to play with. You know, they’ll go through the game and see all the tons and tons of stuff that you go through, and they won’t be able to wait to make levels. It should be cool.

The Man Behind the Myth

AVault: On a personal level, what has this growth (of Quake/deathmatching) been like for you — as a guy who just wanted to make the computer game that you wanted to play? 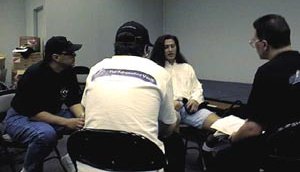 John Romero: It’s pretty cool. I don’t know. I don’t feel so connected with the Quake thing, because I left id and I’m not sitting there hearing all this. I mean, I see what’s going on with Quake, but I don’t know, I don’t feel like I’m that connected because I don’t work there anymore…even though I made the game with everybody else. But it’s really cool, it’s totally cool. We made the game we wanted to play. That’s what we’ve always done, and that’s what we’re going to keep doing. I still play Doom 2 deathmatch every night.