Our friendship hails from way back in the online BBS gaming days. A local BBS called Action Game Network, supporting Doom, Descent, and other similar games, was our addiction for many years. That is, until the world of internet gaming took over.

kiln has been a hard-core Descent player since those days, and has ranked number one on both the original Official Descent Ladder and the Invitational Descent Ladder. In real life, he works as an IT professional.

Hal 9000 began as a die-hard Doom fan, and made the progression through the first person shooter genre from Quake all the way up to Quake3. Although he is also a Descent fan, his interest remained mostly with id Software’s games. Hal 9000 has been creating game levels since those early Doom days, and has had many magazines publish his levels, as well as having one included on the Q2:Extremeties CDROM. Hal also works as an IT professional in real life.

Thundercat, who provides us with those killer intro sound bytes, resides in New Jersey. He too has a home studio, where he produces his own mix of groove.

This radio show began in July of 1998 after listening to an episode of The Daily Dementia hosted by our friend, TC. We decided to give it a shot. Since then, the show has grown tremendously, covering not only Descent and Quake related topics, but rather the entire first-person-shooter genre.

Recorded entirely in our home studio, the show is intended to bring gaming news to the audience in a different format than many other shows. We like to blend a lot of humor and sarcasm with the actual events. Blue (of Bluesnews.com) calls us the “Dream On” of radio shows, in reference to HBO’s television program, which combined a narrative with movie clips to emphasize the main character’s state of mind. 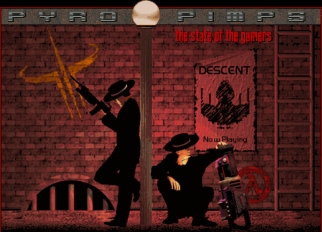