:x Another version of a kiss

(: A tease, or someone who likes to goof off with their smileys

(= Anime tease, or someone who is being funny.

:P Sticking out tongue (most used)… or dog who is thirsty

:b  Another crooked tongue

√ afk: Away from keyboard. Some people joke around saying it stands for ‘away from komputer.’

√ atm: At them moment. Most people would get confused and think you’re talking about the bank teller.

√ Baba: A special someone. Sweety or Honey term that originated from the South African gamers but its part of my online lingo now after 4 years of using it with my IRC friends.

√ Babyshoes: Usually only said to the female gender. Another word that originated from SA.

√ Barrel Jump: A Quake 2 move, where you stand on top of a barrel, shoot it and jump at the same time.

√ bbl: be back later

√ Bootlegger: A defensive move which involves turning a corner while being chased, hugging the inside, waiting until your hunter turns the corner, and scooting off the way you came. It is said to work well.

√ Bots: (also can be known as AI): Computer controlled opponents.

√ Bounding Box: The area of each model that you can actually hit that is invisible. A good way to think of this is the area of damage.

√ brb: be right back

√ Camper: Many people call other gamers who are camping this name, which normally is a put down in general. It’s a person who stays in one spot with a high damage weapon while waiting for people to come by.

√ Camping: To camp is to find a hiding place or to spot a particular item on the map that is important; such as armor, a weapon or some type of power-up. It’s also called camping if you find a respawning zone and constantly shoot anyone that respawns from it.  (See also Whore)

√ Cap: Normally used in Capture the flag games. This means as soon as you capture the flag, you must get to your base to cap the flag to earn your points.

√ Cesspool: A term used frequently with many Quake I old school gamers. This is a massive gib fest in a small quarter area. A way to describe it in a FFA game is crazy amounts of chaos, which was usually caused when everyone got in the same area with someone having Quad.

As for team matches, it starts being general chaos usually due to bad players in pick-up games. So if you ended up on a team server with 7 other people running around like maniacs, you’d be prone to say “this is cess or a cess pool”.

√ Cheap Kill: Much like camping, this is normally something you are where you aren’t playing fair with. A cheap kill can be anything from killing your own team mate or simply doing what campers do.

√ Circle Strafe: Running a circle around your opponent while keeping your gun pointed at him.

√ Circle Jump: A quake 2 physics exploit which involves the gradual movement of your mouse while strafe jumping, to get some insane airtime.

√ CS: A modification of Half-Life that became one of the most popular mods out there. So much that they made it into a retail game.

√ CTF: Capture the Flag. This is a type of mode of a game much like Deathmatch. Only there are two teams where the object of the game is to capture the flag.

√ Clan: A regular team of players who come together to play against opposing teams.

√ cya: See ya or See you later

√ Deathmatch: Most games that are action normally will consist of deathmatch. This is another game mode normally done in multiplayer. In some cases you can play 1 vs. 1, player against one other player.

√ eye-candy: The graphics when they’re on with all the bells and whistles… like lightmap lighting, dynamic lights, hi-res textures and so forth. All eye-candy is usually turned off when playing something like Quake 3 competitively. Again for maximum fps or so see things better.

√ FOV: Field Of Vision, in degrees. Some players make their FOV larger, so they can see more things that are going on around them.

√ Frag: A kill. One Frag normally equals to one kill. This can be another player through multiplayer mode or a bot/AI opponent. Frag was actually a military term before the 3D gaming world borrowed it.

√ Flick Rail: When a player performs a very fast “flick” of the mouse and accurately hits another player with the railgun.

√ Gib: To shoot someone so much that they explode into something that looks like dog food.

√ Ice skating:  If you are playing any game over the internet (multiplayer) and your connection ping keeps going up and over 300, you will be experiencing hand on ice skating. Also see lag. The typical feeling of this all is that you’ll feel like your running forward in the game but you aren’t moving at the same speed as everyone else, you’re either frozen or just looking stupid to other gamers on the game server.

√ IMHO: In my humble opinion

√ kak: An South African word meaning ‘shit’. Often used on game servers to express disbelief at a shot or something when one is killed.

√ Keyboarder: A player who doesn’t use the mouse for any PC games.

1) to say how someone/something is elite as in *really* good.

2) to describe l33t-speak which is the substitution of certain letters of the alphabet with numbers usually. As in h4x0r for hacker and so on.

√ Lag: This is when the server and your machine can’t communicate as well as you’d like it to. It results in a higher ping. Also known as HPB.

√ LAN: Local Area Network. This is where you connect computers together for a VERY fast, very smooth PC game. Whereas on the net with a modem you get about 200-400 ping, on a LAN you get 0-40, depending on the game’s netcode.

√ Llama: Quake equivalent to idiot, stems from the terms “lame” “lemur” and “Llama”, the latter two being curiously strange mammals. Normally this consists of a loser in general.

√ LPB: Low Ping Bastard. Normally this person gets accused by HPB (high Pingers) that they are either cheating but in reality they just have a better/faster connection to the server.

√ Lumberjack: One who uses a rocket launcher, BFG, or any other mass splash damage weapon to knock campers out of their places of hiding!

√ MA:  This is a term is often used in Tribes 2 to describe a Mid-Air shot, which is usually difficult to achieve.

1) A modification to quake, due to the available source code and open license agreement, many individuals and teams of individuals modify areas of the Quake code and graphics (Textures and Skins) to create a different feel to the game or even a completely new game type. Some people can get this confused with Models, listed below.

2) Sometimes used for the term as moderator of a forum (ie. xtremeprejudice clan forum or quake3world.com forum).

√ n1: Nice one, in some cases meaning great shot.

√ Newbie: Also known as rookie, this is someone who is new to a game.

√ o/c:  overclock. As in your processor/video card and so forth to get maximum fps as Quake players like to do.

√ oom: out of mana (EQ/DAOC terminology)

√ oop: out of power (EQ/DAOC terminology)

√ ooe: out of endurance (EQ/DAOC terminology)

√ Owned: When you are beaten by so much that your opponent “owns” you

√ Ping: The time in milliseconds between when you do something in the game and it actually happens. The lower the ping you have, the better. When you fire a gun on a net server, you click the mouse and the gun fires a short time later. This is lag in action, baby!

√ Peeps:  A term that spread wild fire from my buddy Pookie. This means people, friends or simply crowd in general.

√ Quad: Quad Damage. A power-up in every Quake game that normally multiplies your weapon’s damage by four.

√ Quakeworld: This is a version of the original Quake game, with some tweaks to make the game run better through multiplayer.

√ Rape: In the real world this sounds really bad. In the gaming world, this just means you got owned at a match or game.

√ Respawn: This bring your player in the game back from the dead after you have been killed.  FACT – The first time repining became a major part of the game was in Doom’s nightmare mode, where the monsters respawned about a minute after they were killed, and came back at you.

√ Skins: A texture that is wrapped around a 3D model, commonly refers to the texture around the actual character model, hence the term “Skin”.

√ Sniping: This normally is like the movies, you find a safe area to snipe other players while they are walking or running by. In some cases, you can be called a camper if you only stay in one place to not defend your headquarters but to camp weapons or other items on a map.

1) Normally stated when you receive lots of junk mail through email.

2) Gamers use this context when continuously firing a weapon (usually plasma gun or machine gun for finishing off) at an area an opponent might stick his head out of, in the hope of getting a few ‘free’ hits.

√ Splash Damage: In many different games, there’s certain areas in a map that can cause a type of blast radius, where if you are standing near a wall, the ground or other type of areas, a rocket launcher or other types of blasting type of weapons, you’ll be hit with damage.

√ Strafe Jump: A technical jump which involves Strafing while jumping and turning to attain greater heights. This can also be a type of jump to very hard places such as a ledge or other angled areas on a map.

√ Telefrag: If more than one player dies at the same time they are sometimes re-spawned in the same area, this causing in some cases both players being killed again. This is also caused when somebody teleports into the space where you are, they will burst out of your body, killing you instantly. To counter this, don’t stop to look around. As soon as you appear, hotfoot it out of there.

√ Whore: Whore is used in a lot of id Software games. When you camp something like Quad or any other power-ups, most terms that are used are Quad-Whore, Mega-Whore and so forth. (see also camping)

√ Wtf: What the fudge (PG version) 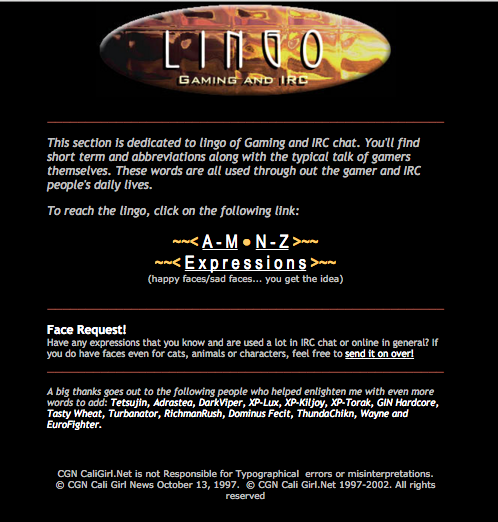