The Wall Street Journal: A Showdown at the Quake Corral Becomes a High School Nightmare 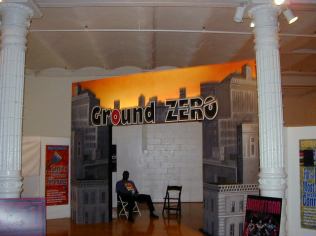 NEW YORK — I took some extra time Friday morning to head out to Dunkin’ Donuts for a large hazelnut coffee. I should have been at the Puck Building in New York around 10 a.m. to meet KillCreek, but I was late and I needed the caffeine. As it would turn out, all the caffeine in the world wouldn’t have helped me. But I didn’t know that yet. 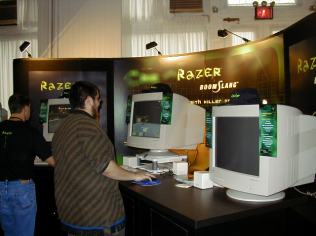 The Cyberathlete Professional League held its “Ground Zero” 1999 East Coast Quake III tournament last month, and though I wasn’t a participant in the tournament, I was challenged to take on one of their Quake masters — KillCreek, whose real name, believe it or not, is Stevie Case. Being a hard-core gamer for a good 14 years, I felt I was up to the task. Granted, I’d never played Quake, Quake II, or the demo for the soon-to-be-released Quake III. An online “competition” (“deathmatch” is a verboten term among video-game pros) isn’t quite where my expertise lies: I once joined a multiplayer adventure in “Diablo,” and as I went down into the dungeon with my adventuring cohorts, they promptly turned around and killed me. Then they laughed; I turned off my computer and swore off online games.

But hey, a video game is still only a video game, right? KillCreek, on the other hand, has vast experience with online games. In a highly touted online competition in 1997, KillCreek took on and handily defeated John Romero, creator of Doom, pioneer of the first-person-shooter genre and all-around video-game god. Having received widespread recognition for the victory, KillCreek was tapped by then CPL founder Angel Munoz to be the league’s first professional gamer. The Cyberathlete Professional League – http://www.cyberathlete.com

I crept into the Puck Building close to 11:30 a.m., wet from drizzle and wide-eyed at the battalion of souped-up machines spread throughout three cavernous rooms. I expected noise, empty cans of Mountain Dew and half-eaten boxes of Chocodiles. Instead, it was spacious and eerily quiet. With $10,000 of prize money on the line — and a chance to go to the professional finals in Dallas this month — these gamers were serious. The butterflies were fluttering about in my stomach, and I was anxious to get the competition going. I have some skills, and I wanted to show them off: My video-game career started with River Raid on the Atari 2600 back in 1979. Could the mighty KillCreek say the same?

As I walked through the rooms, I couldn’t help but snicker at the lines of gamers sitting like drones playing their 15 minutes of Quake III in a preliminary round of the tournament. Slick headphones, wrist supporters, custom keyboards and good-luck tokens littered the terminals. The visuals from Quake III were like nothing I’ve seen before — astonishingly clear and crisp. PC envy hit me as I thought about my suddenly old 333-megahertz Intel Celeron sitting on a clunky desk in my living room. These machines were powerful. I felt a bit chilled, and tiny beads of sweat turned my hands clammy. All of a sudden, I realized that my couple-hours-a-week Nintendo habit would leave me easy prey for gamers on this level. Too late — it was time to take on KillCreek. A PR person walked me to the center room and that was when I paused — as my worst high-school nightmare unfolded right before me. I was prepared to fight it out either with some 18-year-old video-game junkie or with some cagey veteran who’d spent years in the dark, living on Jolt and snack cakes. I did not expect the 23-year-old who stood up and introduced herself: She was gorgeous, she was confident and she was ready to kick my butt.

I feel that I at least looked poised when we exchanged greetings. And perhaps there was a bit of hope when she told me that while at the height of her career she’d played online games for six to 10 hours a day, now she was out of practice since she’d taken a job designing video games. The ground rules for our match: the first person to reach 20 “frags” was the winner. Having never played Quake, I needed a moment to get familiar with the game’s keyboard and mouse controls. While someone was showing me the buttons to shoot, jump and run, KillCreek was setting the monitor resolution to her liking. I set a realistic goal of walking away with one frag. Just one kill — not too hard, I figured. I had 20 lives to achieve this purpose. I’ve played games my whole life. I was ready.

And I lost. Not only did I finish with zero kills, but I managed to actually do myself in once by falling off a cliff in a panic while she hurled rockets at me. Final score: 20 to -1. It was the most pathetic display of my life. Someone even tried to help me by taking control of my weapon selection. But Ms. Case must have had eight hands to control the keyboard as quickly as she did, and her grasp of strategy was light-years ahead of mine: I could rarely even find her, let alone get off a good shot at her. But I did hurt her once, after she started using me for target practice: She descended from a hidden perch for the kill, and I actually saw her — and landed a glorious hit or two in a doomed charge that ended with me in a bloody heap short of my target. Call it Fitzgerald’s Last Stand.

It was the most humiliating loss in my video-game career — and, I’ll admit, the most fun I ever had at losing. Afterward, while I was playing with a cool new mouse designed for gaming, two gamers joined me in an online deathmatch. I killed them in three minutes and left the Puck Building with a smile.

Game for the Competition: Players vie for big bucks, PCs

Dragging equipment to a sports championship can be tough — especially if it’s a computer. Ground ZERO, a computer games competition, drew players and their trusty machines from local neighborhoods and as far away as Alaska yesterday for the beginning of a four-day gamefest sponsored by a group called the Cyberathlete Professional League.

The contestants are vying for cash prizes up to $10,000 and computers — and the glory of being called the best computer games player on the planet. The winner will be crowned Sunday.

For Ben Fernandes, 19, a student at the New York Institute of Technology, hauling his computer from Elmhurst, Queens, to the Puck Building in SoHo for the matches was no problem. Gamers often bring their own equipment the way tennis players bring their own racquets.

He plays computer games — mostly over the Internet with multiple players on a high-speed line — four hours a night.

With a part-time job to support his first love, he spends about $300 per month upgrading and adding to his computer system.

“Some people take it too seriously,” he acknowledged.

Other players in the competition put aside health concerns for love of the game.

Toby Carpenter, 23, wore a protective wrist guard but took part in the action. “It just happens when you work with a computer and play games a lot,” the Manhattan resident said.

Though a majority of the competitors who showed up were men, several women were diehards, too.

Frances Roberts, 21, flew in from Fairbanks, Alaska. She usually plays games such as Quake 3 with her husband or friends she’s met online. “I want to win cool prizes,” she said.

“It bonds us,” added Anne Chang, a competitor from Boulder, Colo., who met Roberts online.