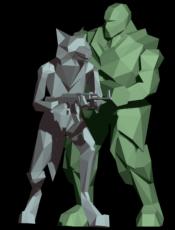 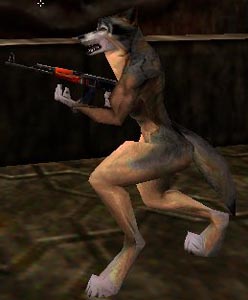 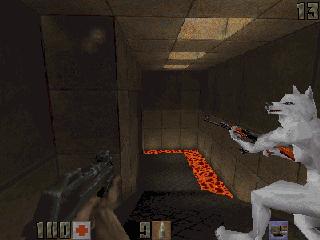 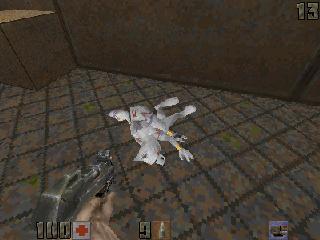 As everybody can see here (And I hope many of you know about this model) this is the Female Werewolf model made by Scott A. H. Ruggels. This is a little snip of the readme file:

This is a 773 polygon mesh of a female Werewolf, blending human and lupine feaures with an eye towards realism. It was built and animated in 3d studio max as a learning excercise in the production use of Character Studio plugins for 3ds Max 2.5, Biped and Physique. All other modifications were using the standard Quake2 tools. it has Custom sounds, provided by Steve Irvine. it comes with 12 skins including CTF skins (red and blue)

Hmm… I could say that just about summarizes it… :) Just letting everyone know that this model, female or not, just happens to be my favorite, but even so, I’m going to grade it just like everything else. Cruel and harsh. :)

Well, as it said in the readme, it’s a mesh of a female werewolf, with 773 polygons, and it’s 991 total with the weapon. Not too bad, either… in fact, it’s awesome. Skin warping doesn’t seem to be a problem, nor does it seem to be too jerky in the joints. Also, there are no wasted polys that I see anywhere in the mesh. A work of art, I must say, for an experiment. I give it 5 stars.
Score: Ten

Again, a work of art here. But it does have some bad sides, too. Oh well… Not everything can be perfect. :) I guess I’ll start with the stance animations, like I always do… Not that it’s a BAD thing, mind you. :)

The stance is about the same compared to the male’s idle animation… rising and falling torso with the breathing, part of legs follow, and some looking around. The wolf takes a full breath once, then another looking right, another left, stops looking for a moment, then goes back to normal. Run is pretty good for an animal… not too much bounce in the movement. Perfect for stealth. Well, maybe… :) The shoot sequence is also done nicely, the gun firing and the wolf taking the recoil, then bringing the gun back to ready position. The pain animations are ok, with the wolf showing signs of pain by the mouth opening and recoil from the hit. Also, I have started to notice some clash between the weapon and the wolf, where in the first pain sequence the left hand seems to go into the clip of the gun. However, this is really not noticable in the game unless you completely remember every single frame to look for, so I won’t subtract points for that. Also, in the jump animation, the wolf jumps high into the air then lands squatting, using her other hand to help with the impact, then gets back up. Just a dandy little jump animation, that’s all… :)

The wave animations are just as well made. The flipoff animation makes the wolf appear to show her teeth, then cocks her gun back. The salute animation shows her using her second hand to hold the gun, then salutes quickly with her right hand, then goes back to normal position. How many PPMs do you know of that do that for their salute? :) Now this is where trouble begins. In the taunt animation, the wolf leans forward then leans back high in the air and howls through this time, then goes back to normal stance. The reason that trouble brews is because the gun; the back of the weapon goes into the right side of her chest. But this is only a minor problem because it does not go through the wolf… However, experimental or not, this does degrade the quality of the work and drops off a point from the total. Now, with the wave animation, the wolf raises her left hand up then brings it forward, while in the point animation, she points forward, then looks back behind her, possibly for support. This does not help much in DM, though. I probably could dock a point for that, but Ruggels mentioned that he did make the model with team animation support, so I’ll just leave the point alone.

Now, in the crouch-stance animation, the wolf has her head next to the weapon, as if possibly sniping. The crouch-walk animation shows her crouching in the same position, but moving her legs to move her forward. Man, if only I had reverse-jointed legs, imagine how many races I could win! :) The crouch-fire shows her recoiling her shoulder from the gun and going back to normal position, crouch-pain shows the wolf recoiling her head in pain. Now for death animations… the crouch death shows the wolf bringing her hands to her face and falling back on to the ground, death 1 shows her flying back from the impact, this time to her belly, and thuds onto the ground… death 2 shows her flying forward onto the ground, possibly from being hit from the back or a hit in the legs, and death 3 shows her grabbing her stomach, then stumbling onto the ground, which is really cool to me (not that dying sounds pleasant…) :)

To summarize things up, this earns 4.5 stars.
Score: Nine

The skins are VERY good. Nicely done, guys. The skins are high in detail. The skin size is 256×256, so no skin warping is going to happen for those who use OpenGL or others who don’t use software mode… Skin wastage isn’t too horrible, either, with only 31 percent waste of skin space. There’s really not much else I can say here either, other than it does come with 12 skins including CTF skins, as the readme states. I would give it a 5-star, but the skin wastage could’ve probably been less, so I’ll only deduct half a star for it. It earns a 4.5 star rating.
Score: Nine

This is why I love this model so much: the sounds. You hear it’s snarl sound as it jumps, and as it gets hurt, it makes whining sounds. The more hurt you get, the more painful it sounds, until you hear it barking back in loud tones. When the wolf dies, you either hear it snarl again, howl, bark, or whatever. The reason as to why I like it so much is because of how the model and the sounds combine together so well. Well done, guys. This earns a top-notch 5-star rating.
Score: Ten

There is no VWep support in the official release. However, a VWep addon was later made by Ruggels, and is in the Quake2 accessories. You also have to get 2 skins that were released with the VWep, but it’s worth the extra time, unless you don’t like foxes. You can download the whole bundle here.

One word: Definetly. There’s no doubt that this should be in the next pack. It’s a shame, though, that polycount stopped these though. Not that it’s a bad thing that they did, mind you… Hmm, that sounds familiar, doesn’t it? :D I mean, who doesn’t want a wolf that loves to unload a machinegun at you? Ok, so maybe not in real life… :)