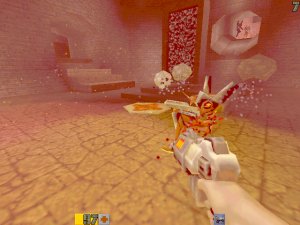 [ BH ]
Neon Genesis Evangelion is a popular anime series which has spread to areas around the globe. It is about Humans fighting with Angels (which are messengers sent by god?!?!) and also to prevent the extinction of humanity. And to do that, the top scientist of the world created the Evangelions. This are artificial beings without soul. These Evas function through a Cerebral Nerve link with their operators. The pilots, whom are a group of special children, all aged 14, acts as the Evangelion’s soul. This model is based on the Test type Evangelion, called EVA-01, which is also the hero’s Evangelion. EVA-01 is unique compared to the other EVAs because it is the only EVA that can operate without power supply (that’s if Shinji (the hero) is in EVA-01 first).

I really don’t know what else to say other than that as an intro, it’s a plugin player model of said armored angel for Quake 2, and one that is very true to the original anime at that.

[ BH ]
Ah… the model as a whole is superb. Especially when it is the author’s first attemp in making a 3D model. Overall, the model represents EVA-01 from the anime very well. The details given to it matches the EVA closely. Polygons have been fully optimised. The author has left out the none important parts and use the skins to maximize the details. There are no wasted polygon surfaces. The linkage of the polygons are also done well.But there is a part of the model which used unneccessary polygons. On the thigh of the model, it seems to over used polygon. The model would still retain it’s physical appearence even at a lower polygon count at the thigh. But not a big issue actually as the model can be considered to have a reasonable polygon count. 5 STARS here!!

[ WW ]
I’m a big fan of the anime this model is based on, and after sitting and doing side-by-side comparisons between the model and the anime, there’s only one difference. Sadly though, a *BIG* difference. For the two sequences where the “AT-field” is used, the model-maker shaved _6_lousy_polygons_ and used a hexagonal AT-field, while in the original anime, the AT-field is _always_octagonal. Docked a star for the glaring error.

The weapon model, while it isn’t exactly like any of the weapons I’ve seen in the actual Anime, looks similair to most of them that it makes a good, generic, non-descript weapon model. And in this case, no errors anywhere in the weapon. Also, this model has a unique difficulty in scoring it, as from the front and back, and “fins” on it’s shoulders are almost invisibly thin, while from the sides, they’re as wide as the model. I’m going to be leniant in this case and use the head-on view as the pose to pass verdict from, and as they are thinner than the female model’s arms from that direction, the fact that they jut up above the male model’s head can be ignored Score: Nine

[ BH ]
The animations were extremely well choreographed. They are as fluid as any of the standard Quake models. The author said that he used 3D Studio MAX for designing the model and also animating it. But seriously, I would have mistaken that this model’s animation was done in Lightwave should Ionized Kit didn’t mention the use of 3D Studio MAX.The overall animations are excellent, but what I like most about the animations are the additional spicy added to the taunt, salute, point and flip animations. The flip and salute animations capture the EVA’s behaviour very well. I even taugh that I was watching EVA-01 in action in the anime :-). The point and taunt animations sports the AT (Absolute Terror) field in action. Really cool to look at. As Ionized Kit’s first 3D model, it is a job extremely well done. And I’m sure many people will agree with me. I can’t wait to see if Ionized Kit will release the other EVA’s as well :-). 5 SHINING STARS!!!

[ WW ]
Here’s where the modeller really brought EVA-01 to life in all it’s high-tech, anime glory. Again, I sat down with the anime and comapred the running, the jumping, and the weapon firing with the show, and it came up aces. Not a single flaw anywhere, except the afore-mentioned savings of 6 polygons that marred the otherwise-flawless model. Having already docked the Model itself for the ommision though, I won’t do that here.

The animations themselves are very nice, although I wish the author had chosen a more identifable sequence for the salute, as the crouching sequence really is very hard to tell from a crouching EVA-01, so the salute becomes nearly worthless for signalling in team games.

Surprisingly, no matter the sequence, I never saw a point where the weapon model passed through or fell out of sync with the player model, a very obvious attention to detail for which I’m quite thankful for.

The Taunt and Point are very well-done sequences as well, and while they could go through a wall if used at point-blank range, such never really seems to happen, as one doesn’t normally taunt point-blank to a wall. :-) But, as the problem _can_ occur with the point animation, a loss of half a star.
Score: Ten

[ BH ]
The model comes with 3 skins. 1 Deathmatch skin and 2 CTF skins. All the skins are GL friendly at 256×256 which strikes excellent detail in GL mode. Also the skin area are optimized very well with hardly any unused skin area.

The default skin, which is the deathmatch skin is a almost perfect representation of the anime EVA. ALmost all the details are there. The author even went took the trouble to draw in the EVA’s external power plug socket at the back of the model. The CTF skins are also designed well. From far, the red CTF skin looks like that of EVA-02’s. However, the CTF skins are mere tint of red and blue from the default skin. 4 and 1/2 stars here!

The author thinks they skins are of a poor quality, but they’re very well-done in my mind. There’s the “true to the original” purple/green/orange skin, and 2 CTF skins that each have custom coloring of a rust/aqua/green for the red team and a cyan/green/orange for the blue team, both of which are easily identifable at long ranges.

The author is right though, that the skins don’t quite have the highly polished look of a professional skin, so they’re not quite 5-star quality. They miss the mark if only just barely.
Score: Nine

[ WW ]
No sounds come with the model. The author recommends the Rhino soundpack and I have to agree that they suit the model well.

[ BH ]
As for now, it doesn’t come with Vwep suppport. But it souldn’t be a problem to add the support in due to the fact that this model use 1 hand held weapon only.

[ WW ]
Well, I don’t see why it couldn’t happen. The model’s weapon is properly seperate from the main model, and if the same quality if used for the rest of the weapons, it would be very impressive indeed.

[ BH ]
This model fullfills all requirements for the pack eligibility and will be included in the next pack release.

[ WW ]
Well, it’s close thanks to those accursed “fins” that the model has, but if the model was scaled down to fix that, then from the front and back it would be too bloody short to be fair. *sigh* It’s a tough call, but I think, considering the high quality of the entire model, I’ll again fall on the side of the model and say that it will be in the next pack. :-)

[ BH ] Wow… I had a real hard time trying to catch this pictures. I only manage to capture one picture of the blue EVA-01 skin :-(.