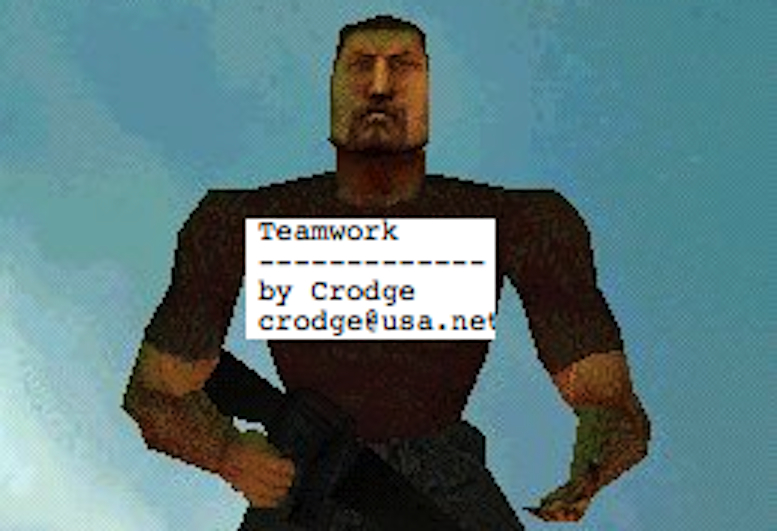 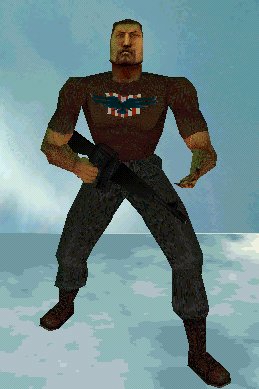 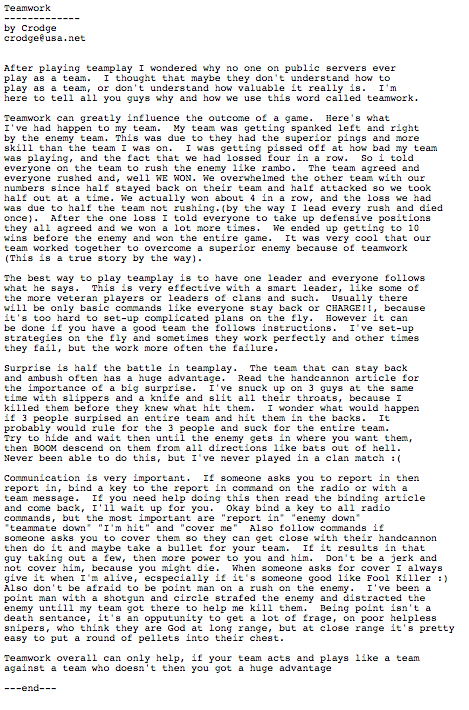 Teamwork can greatly influence the outcome of a game. Here’s what I’ve had happen to my team. My team was getting spanked left and right by the enemy team. This was due to they had the superior pings and more skill than the team I was on. I was getting pissed off at how bad my team was playing, and the fact that we had lost four in a row.

So i told everyone on the team to rush the enemy like Rambo. The team agreed and everyone rushed and, well WE WON. We overwhelmed the other team with our numbers since half stayed back on their team and half attacked so we took half out at a time. We actually won about 4 in a row, and the loss we had was due to half the team not rushing.(by the way I lead every rush and died once). After the one loss I told everyone to take up defensive positions they all agreed and we won a lot more times. We ended up getting to 10 wins before the enemy and won the entire game. It was very cool that our team worked together to overcome a superior enemy because of teamwork.

(This is a true story by the way).

The best way to play teamplay is to have one leader and everyone follows what he says. This is very effective with a smart leader, like some of the more veteran players or leaders of clans and such. Usually there will be only basic commands like everyone stay back or CHARGE!!, because it’s too hard to set-up complicated plans on the fly. However it can be done if you have a good team the follows instructions. I’ve set-up strategies on the fly and sometimes they work perfectly and other times they fail, but the work more often the failure.

Surprise is half the battle in teamplay. The team that can stay back and ambush often has a huge advantage. Read the handcannon article for the importance of a big surprise. I’ve snuck up on 3 guys at the same time with slippers and a knife and slit all their throats, because I killed them before they knew what hit them. I wonder what would happen if 3 people surpised an entire team and hit them in the backs. It probably would rule for the 3 people and suck for the entire team. Try to hide and wait then until the enemy gets in where you want them, then BOOM descend on them from all directions like bats out of hell. Never been able to do this, but I’ve never played in a clan match :(

Communication is very important. If someone asks you to report in then report in, bind a key to the report in command on the radio or with a team message. If you need help doing this then read the binding article and come back, I’ll wait up for you. Okay bind a key to all radio commands, but the most important are “report in” “enemy down” “teammate down” “I’m hit” and “cover me” Also follow commands if someone asks you to cover them so they can get close with their handcannon then do it and maybe take a bullet for your team. If it results in that guy taking out a few, then more power to you and him. Don’t be a jerk and not cover him, because you might die. When someone asks for cover I always give it when I’m alive, ecspecially if it’s someone good like Fool Killer :)

Also don’t be afraid to be point man on a rush on the enemy. I’ve been a point man with a shotgun and circle strafed the enemy and distracted the enemy until my team got there to help me kill them. Being point isn’t a death sentence, it’s an opportunity to get a lot of frags, on poor helpless snipers, who think they are God at long range, but at close range it’s pretty easy to put a round of pellets into their chest.

Teamwork overall can only help, if your team acts and plays like a team against a team who doesn’t then you got a huge advantage.

Teamwork article was in the temp folder of the Action Quake 2 Map Depot (unfortunately, not much is left of the AQMD but the front page, screenshotted (word? not word?) above, is left) here is the archived page: https://web.archive.org/web/19990129030513/http://www.mapdepot.net:80/temp/teamwork.txt