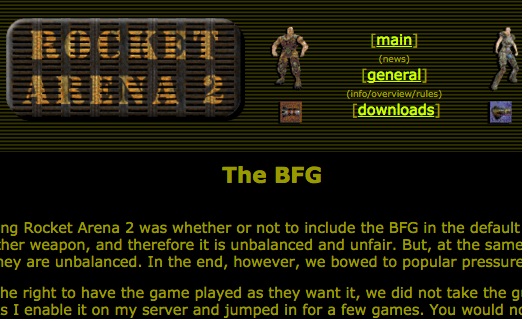 One of the most difficult decisions we had to make when designing Rocket Arena 2 was whether or not to include the BFG in the default weapons given to players. At first it seemed quite simple – the BFG is capable of more destruction in a shorter time than any other weapon, and therefore it is unbalanced and unfair. But, at the same time we had to keep in mind that one of the goals of Rocket Arena is to make players better with ALL the weapons, even if they are unbalanced. In the end, however, we bowed to popular pressure and left the BFG out of the default weapon set.

Since another of our goals with Rocket Arena is to give players the right to have the game played as they want it, we did not take the gun out of the game entirely. It can be turned on in the server.cfg file, by an admin, or by voting in the arena. So, one day for kicks I enable it on my server and jumped in for a few games. You would not believe the grief I received from players that I used it against. I was called “cheap” and a “cheater” even though I was using a gun that was freely available to them as well.

But is using the BFG really cheating?
I say NO, and for at least two good reasons.

First of all, the gun is available to all of the players. Anything that is given on purpose by game makers to all players and in public knowledge should not be considered cheating (I hold this view on the FOV issue as well). If you think the BFG is unbalanced and superior to all other weapons then use it! No one ever criticized a Rocket Arena 1 player for using the Rocket Launcher–even though it was far superior to all of the other weapons. If you think you are too GOOD to use the BFG, then don’t, but don’t complain when others choose to.

Secondly, people do not realize that the BFG is far and away the most strategic weapon in Quake 2. Now, before I discuss the specific strategies applicable to the BFG, let me digress and discuss strategy in general for a moment.

A wise man once asked me how I define strategy. After all, I told him that Rocket Arena 2 emphasized strategy more than Rocket Arena 1. What did I mean by this? Well, after thinking it over a bit, I think I have a nice Quake-based illustration to show my concept of strategy. I see strategy as the skill which is lacking in a computer opponent (i.e. a bot) that allows it to be defeated by a human with otherwise inferior reflexes and aim. On a basic level a bot is good at very few things: aiming, dodging, and prediction. These features usually amount to a minuscule amount of code compared to other features such as tracking, movement, and decision making. When looking at the Rocket Arena 2 levels I found that the best levels, the most STRATEGIC levels, were the type that bots would be terrible on. Multiple paths to the same location, various sound cues that throw off an opponent, places for quick escapes, etc., can all be used by humans to outwit bots (or other humans) but are very difficult for a bot to conceptualize and use effectively. A more narrow definition of strategy would include terms like “sneakiness” and “stealth,” the ability to surprise your opponent not by a good shot, but by showing up where he least expect you. These skills are what people use to defeat bots, not better aim or dodging skills. They are unique to the human mind and are different in every human.

So how does this apply to the BFG?
Although we have yet to see what will eventually become of Q2 Bots, I doubt we will ever see a bot as effective with the BFG as a human with a bit of practice. Why? Because unlike rockets or bullets the BFG requires strategy. So much strategy that it has an entire FAQ devoted to it.

For starters, the BFG is the only Quake 2 weapon that is not fire and forget. With a rocket or grenade you can fire, turn your back and run away, and the end result will still be the same. On the other hand, the BFG requires you to take action after you fire. Not only must you line up your shot so that it will move into a line-of-sight with your opponent, but you must also maneuver yourself into such a position after the shot is fired. If either one of these things does not happen the shot will be mostly ineffective.

Secondly, the BFG is the only weapon with a large pre-firing delay. This means that you have to commit to firing before your shot is lined up. If you wait until you are lined up you will probably miss the shot. Anticipation, prediction, and commitment are all important. Not to mention the ever popular silent-BFG trick

The BFG also adds a lot more strategy to weapon defense as well, and I believe that any weapon that adds strategy to both sides of the game can’t be all bad. I won’t go into detail about BFG defense tactics except to say that there are a lot, and in fact, a person who has practiced defending against the BFG is difficult, if not impossible to kill with one (compared to using conventional weapons against them). Because of both the long pre-firing and reload times an opponent must weigh the decision to attack and hope to kill the person or run and hide before the blast.

Now, you still may not be convinced that the BFG is a fair or balanced weapon. All I can ask is that you GO TRY IT. I have run into may people on servers who refused to even try the BFG against me. And of those who did, most found that: #1 it is hard to kill someone who knows how to avoid it, and #2 it takes more skill to use than you might imagine. So, hop into a game, whip out the BFG, and anyone that gives you grief, point them to this article.

But is the BFG right for Rocket Arena 2?
Yes and No. I don’t believe the BFG should be available in small, single room style arenas. These arenas are designed to enhance skills like aiming and dodging – not strategy. The BFG would be a bit too effective in this situation (when there is no place to run or hide). In most other maps however, I believe it is perfectly acceptable. Most of the time it is not difficult to run away or find a hiding spot when you hear a BFG blast coming. Several Rocket Arena 2 map makers have even designed arenas with the BFG in mind. These maps include areas in which you can easily duck into to avoid a blast and come out firing when it has passed. On these maps the BFG has no advantage over any other gun, and it some cases, it is at a disadvantage. As I said, however, the weapon selection is given first as an option to the server operator, then as a voting option for the players. So you have a choice, vote for freedom, vote for strategy, vote YES for the BFG.

If you would like to discuss this further, feel free to post your opinion on the PlanetQuake messageboard under the Quake II – Playing conference.