The Chefs desperately needed coordination and tactics that work when you are unable to communicate with eachother since we are modem players. This need and the fact that some of the chefs never had met eachother IRL was the seed that Kockmeat I ’97 started to grow from. The very strange name for the event was derived during an IRC session some weeks before. It’s a mix of misspelled english and swedish consisting of kock, the swedish word for chef and the english word meet, misspelled to meat to suit the twisted ways of the Chefs.

The date was set and the preparations began. Arranging transport and hardware for a 9 player LAN party takes some doing. All the nessesary equipment, mostly monitors and network equipment, were borrowed from helpful friends(thank you all). Apart from all the vital equipmemt Mumin managed to get hold of a large screen projector to be used in our briefings. This is a must for future Kockmeats :)

The big day finally came and when all had arrived the installation and connecting of the local network began. Despite all calculations there was still a network card missing. We considered the options of taking turns playing 9 on 8 computers but decided that it was worth getting another card. A very fast drive into Stockholm to borrow a network card solved the problem. At last all the computers were up and running after some hair tairing over a Compaq’s built in network card. We were stupid enough to believe that it should show up under network cards in WIN95’s system menu :) No, not on a Compaq.

The gibbing began with an all out deathmatch to warm us all up and get us in the mood. Some of the Chefs who never played Quake on LAN were amazed by the smoothness and furious action compared to internet play. Playing LAN Quake is a completely different experience and players who are good at internet may not be at LAN and vice versa. One thing is sure though: Gibbing makes Chefs hungry!

After the deathmatch warmup everybody was hungry so we decided to take some of the in advance prepared gibgryta. Gibgryta is again a mixed language word from english gib and swedish gryta which is stew in english. The gibgryta is closely realted to chili and it basically consist of some vegetables, a lot of tomato sauce and last but not least big chunky peices of meat. If you are interested in cooking like us you can find the recipe at the bottom of the page.

The gibgryta was a success and Chef Dance was complimented on his skills in the kitchen and the tender LPB meat he had went out and gibbed earlier that morning. While eating we discussed how the rest of the time should be spent and bragged about the previous deathmatch game. But however nice talking and eating with your fellow chefs is, it’s playing quake we gathered for so we put away the dishes and started with the Quake activities.

The first thing was to get the teamplay going and we divided ourselves into two teams and started playing on a level which we all knew well. This went sort of well but one thing was still missing: To play like a true team you need tactics. We decided to have a breifing and discuss tacticts but first we were eager to try Last Man Standing a new patch still in beta by Evildead.

After playing LMS we started briefings on the levels which is mostly played in Quake clan matches. We did a walktrough of the level with all the secrets and startegic points using the large screen projector so that everyone could see. This was really useful since everone could give their own opinons on tactics and show their favourite places. After a tactic had been decided on we tried it out in practice.

The two teams we earlier divided us into seemed equal and and we tried to play using the tactic we agreed on during the briefing. This was a really useful exercise and the teamplay started to work. This way the level briefings went on with playing the tactics inbetween. By 21:00 in the evening we felt that it was time for something different so we decided to take a brake and play some ctf.

Playing CTF was really fun but unfortunately was the teams that were so even in DM not so even in CTF. But what did it matter, we were having too much fun to notice such things. After CTF we continued to play dm all trough the night and a good bit into next day. The first Chefs to throw in the towel was Mumin and Lanze as early as 02:30. Two hours later Baron dropped off and at 06:00 I, Dance, started to see blurry and went to sleep.

The real marathon quakers who stayed up longest were Nikodemus,Sorken, Lakerman, EZrider and Sir Prize. They stayed up until 7:30 in the morning before they went to sleep. Some of them was such badass quakers that they didn’t bother to go bed but slept down on the bare floor by their computers. At 12:00 I got up and started to wake everybody. What did these people do then? Did they eat breakfast? Nooooo! You have to play Quake first! Are the Chefs diehard quakers or what :)

This recipe is for the Swedish Chefs Gibgryta and it’s estimated for 10 hungry Chefs. The Swedish Chefs accepts no responsibility for people who becomes homocidal quake freaks from eating gibgryta. Some ingredients can be hard to come by so we have put more common alternatives within parenthesis.

First thing to do: Put the white beans into water the day before cooking gibgryta. Put the crushed tomatoes and the tomato pure into a big cassarole on low heat. Chop and fry the bacon, put them into the cassarole. Slice the meat gibs into more convenient size bits. Season the meat with a litte salt and white pepper.Fry the meat and put it into the cassarole. Chop onions, carrots, garlic and paprikas, fry them and put them into the cassarole. Add the beer, vinegar, cocoa, sugar and beans. Stir and add chilipepper and tabasco to strenght and taste. Cook until the beef and beans are tender. This takes about 2 hours depending on the quality of the beef, remember to stir every 5 mins or it will burn. 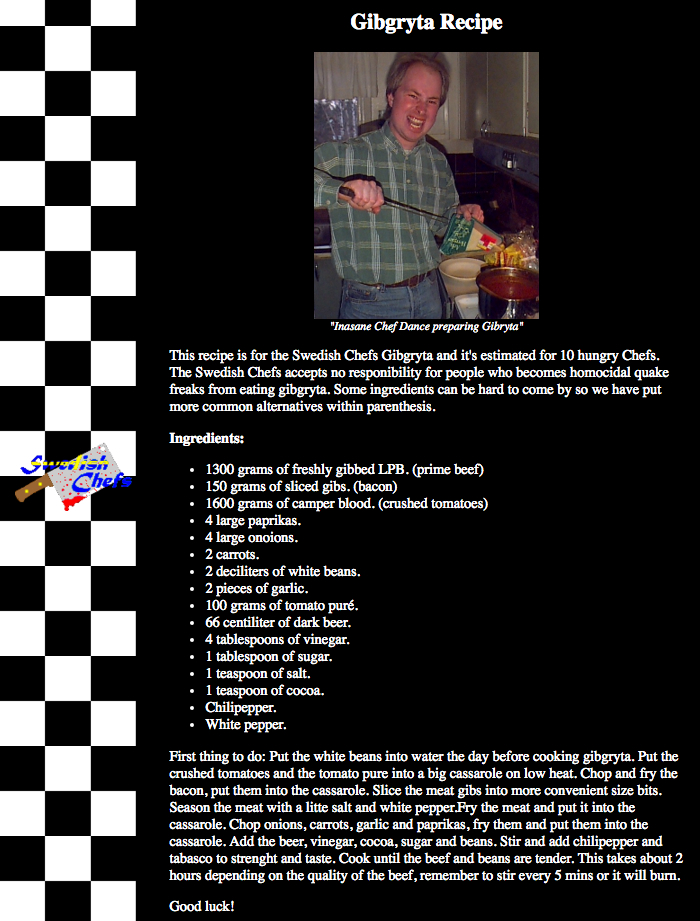 Questions or comments about this page or the gibgryta is answered by Chef Dance. 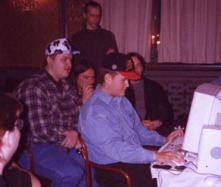 It was a very cold Saturday morning when Quakers from all over Sweden met at IVA:s conference center in Stockholm for the biggest gaming event of the year. Fragfest ’96 was heavily sponsored by companies like Gateway 2000, Microsoft and PC Gamer. Gateway supplied the computer equipment and 1st prize while Microsoft and PC Gamer provided additional prizes. It took some time to get everything organized and ready to go so the actual event didn’t start until 13:00. By that time everyone was excited and eager to start playing.

After the short introduction the games were off to a flying start. There were no really bad players, just more or less good. Of course some had to be the ones to be beaten in the first round and those players included people like Shining/KI, Hobbex/DA and me(Dance of SC). Among the players who made it to the the quarter finals were Doomer/TB, Eraser/TB, Sniket/UYB, Nikodemus/SC, Xenon/UYB, Totte[+], Kryo and Okkun/SWEMOB.

First Adam Schaub the master of ceremonies greeted us all welcome and did a quick brief on the rules and how the game should be. Due to the less than planned turnup of only 50 players instead of 128 the initial rules was a bit changed. There was going to be groups of 4 players on 2 tables playing deatmatch for 2 x 20 min on 2 different levels. From each group the two best players would qualify for next round.

The game gets tough

In the quarter finals the matches were getting tougher and more intense. A player who surprised most people by acing his quarter final was Totte from Crusaders. One of the players in Tottes group who learned this the hard way was our own Nikodemus. Faced with both Totte and Sniket on two of his most hated levels he was beaten and out of the game. Clans with a lot of members still in the game was UYB, TB, CMC and Crusaders.

The semifinals included the best Quake gaming I’ve ever seen. The best players fighting with no such thing as a ping advantage. The feared players of CMC, Storm and Buchman was eliminated by their former modem victims Sniper and Eraser. When all rocket blasts, gibs and blood cleared only four players remained: Doomer/TB, Xenon/UYB, Okkun/SWEMOB and still hanging in there Totte from Crusaders. The ultimate challenge awaited them, the final with four of Swedens best Quakers.

There can be only one

The final was played on E1M7, House of Chton, 40 minutes stretch, no pause. By the looks of the game and amount of kills all the time you would have thought that it was eight people on the level and not only four. No one lived longer than a minute at a time, it was just the question of who was able to gib the others most during the short time he was alive. It soon became clear that this game was out of Xenon’s league as the others fragcount rose away from him. Doomer grabbed the lead by 10 frags and Totte and Okkun took turns beeing on second place.

What Doomer once get hold of he never lets go. That included the lead he got at the start of the final. Totte and Okkun did their best but they just couldn’t match Doomer who when the timelimit expired had an impressive 137 frags, 14 frags over Okkun who was closest after on 133. Totte who had played very well all night ended up a total third 6 frags after Okkun on 127. Last in the finals was Xenon at only 69 frags. The finals ended just before midnight and a lot of tired but happy quakers left the battlegrounds for a warm well deserved bed.

The ten best quakers in Sweden got prizes for their efforts in Fragfest ’96. Besides the computer Doomer got the prizes consisted of games from microsoft and a Quake expanion set called Aftershock. The group photo in the end of the ten winners (except Buchman/CMC) shows from left to right: Nikodemus, Eraser, Kryo, Doomer, Okkun, Totte, Sniper, Xenon and Sniket.

That’s about all I have to tell about Fragfest ’96. Remember this is no official statement from the organisation of Fragfest ’96, it’s just my personal opinion of the events that occoured there.