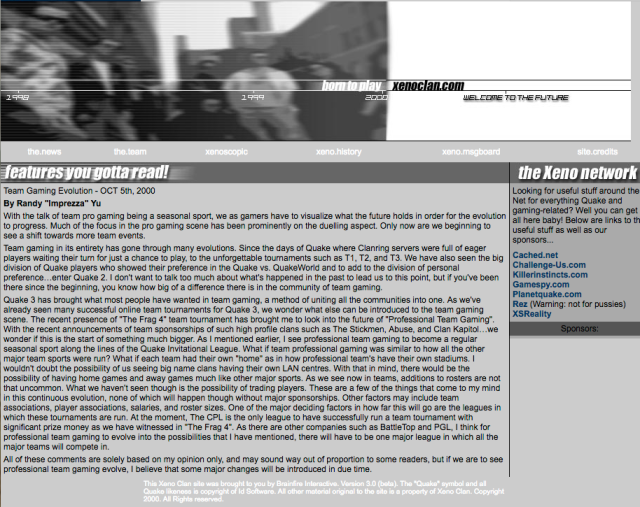 With the talk of team pro gaming being a seasonal sport, we as gamers have to visualize what the future holds in order for the evolution to progress. Much of the focus in the pro gaming scene has been prominently on the duelling aspect. Only now are we beginning to see a shift towards more team events.

Team gaming in its entirety has gone through many evolutions. Since the days of Quake where Clanring servers were full of eager players waiting their turn for just a chance to play, to the unforgettable tournaments such as T1, T2, and T3. We have also seen the big division of Quake players who showed their preference in the Quake vs. QuakeWorld and to add to the division of personal preference�enter Quake 2. I don’t want to talk too much about what’s happened in the past to lead us to this point, but if you’ve been there since the beginning, you know how big of a difference there is in the community of team gaming.

Quake 3 has brought what most people have wanted in team gaming, a method of uniting all the communities into one. As we’ve already seen many successful online team tournaments for Quake 3, we wonder what else can be introduced to the team gaming scene. The recent presence of “The Frag 4” team tournament has brought me to look into the future of “Professional Team Gaming”. With the recent announcements of team sponsorships of such high profile clans such as The Stickmen, Abuse, and Clan Kapitol�we wonder if this is the start of something much bigger. As I mentioned earlier, I see professional team gaming to become a regular seasonal sport along the lines of the Quake Invitational League. What if team professional gaming was similar to how all the other major team sports were run?

What if each team had their own “home” as in how professional team’s have their own stadiums. I wouldn’t doubt the possibility of us seeing big name clans having their own LAN centres. With that in mind, there would be the possibility of having home games and away games much like other major sports. As we see now in teams, additions to rosters are not that uncommon. What we haven’t seen though is the possibility of trading players. These are a few of the things that come to my mind in this continuous evolution, none of which will happen though without major sponsorships.

Other factors may include team associations, player associations, salaries, and roster sizes. One of the major deciding factors in how far this will go are the leagues in which these tournaments are run. At the moment, The CPL is the only league to have successfully run a team tournament with significant prize money as we have witnessed in “The Frag 4”. As there are other companies such as BattleTop and PGL, I think for professional team gaming to evolve into the possibilities that I have mentioned, there will have to be one major league in which all the major teams will compete in.

All of these comments are solely based on my opinion only, and may sound way out of proportion to some readers, but if we are to see professional team gaming evolve, I believe that some major changes will be introduced in due time.