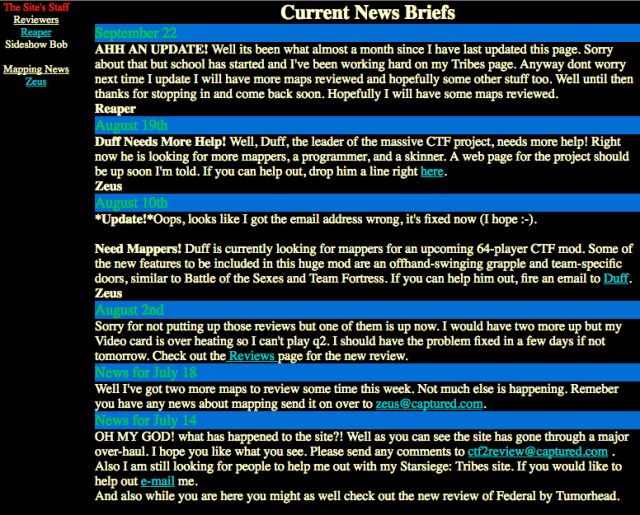 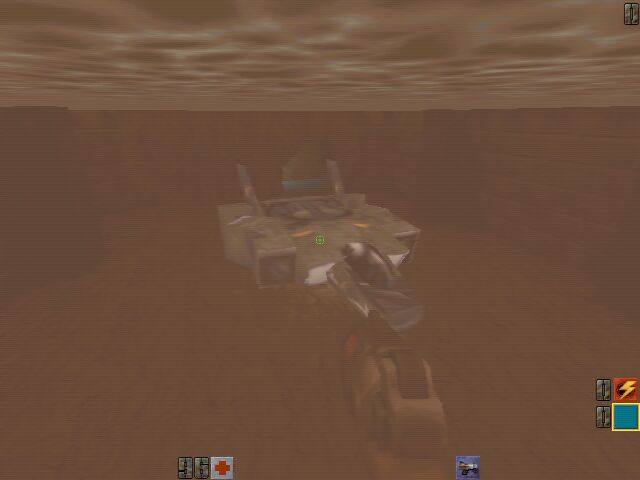 I am glade to see that the level of quality for CTF levels is rising, and this map is at just about the highest quality. This is the first map in a series of two. Both have a good background story that is included with the zip file. The only problem I can find in this map is that there were a few tight places that could get crowded very quickly, but to fix this Lance makes sure that there are multiple routes to almost every where. This map looks great and has a great atmosphere to it. Some of the lighting done in this map is great. 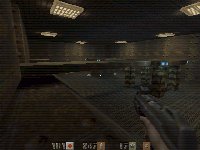 This is the second map in the series and it too is a great map. This map lacks the great detail of The Isolated Depths, but makes up for it gameplay with wide open areas with pillars that you can duck behind and several heights for you to get to to attack down on your opponent. The grapple can be used very effectivly in this map and someplaces you can only reach by using the grapple. This is a could map for those 32 player servers out there. Remember that if you downloaded the Fall Haven: The Isolated Depths you do not need to download this file as they both come in one pak file. 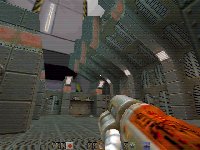 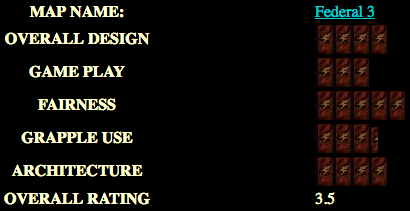 Surprise, surprise yet another great map by Tumorhead! This is there third version of Federal and with each one he has cut down the lag by making changes in the map. This map looks good with all its nice little details. I like the fact that he has the parts of the base labeled for navigation purposes. This is a fairly large map so bring a lot of people to the party or else you’ll be wandering around a bit looking for people to kill.

This is the first installment of several maps from MiLkMaN. This map looks fairly clean with only a few texture baubles. I like that there are two ways into the flag room, but there are only 5 major areas in the entire map. Two major hallways in each base and the mid-section between the bases. I would like to see this map a little bit bigger with more route chooses in it. This map should be able to hold about 12 people in it before it starts to get crowded. 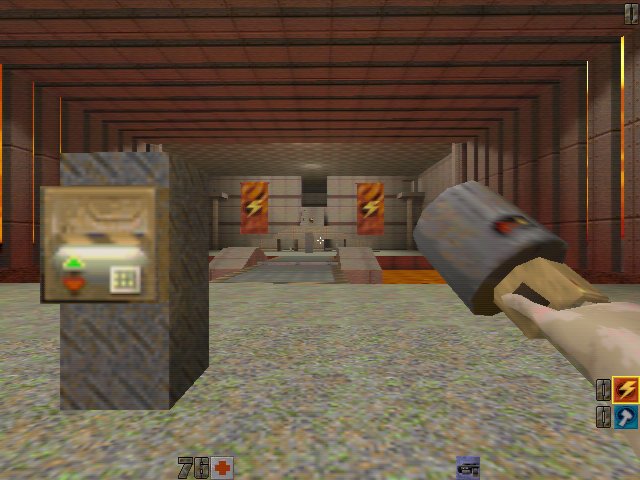 The third map entry from RikTomb doesn’t quiet live up with the other two but it is still a pretty good map. It could use a bit more detail to some of the areas. This map is fairly open and doesn’t provide much cover or corners to duck behind. I did like how some of the area felt though with his use of some ambiant sounds it does just enough to make make you feel right at home. This map should be able to fit up to about 24 players in it with out feeling to tight. 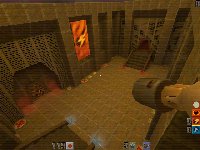 This is Bauds first “completed” map, and its pretty good. The few things this map could use is more open area fighting grounds with there really only being one big open area and another way to the flag room. I do you like how you can see the opposing teams flag room from your own flag room and vice versa. This map is a little tight and is good for 10 players. Overall this map looks ok even though as with many maps there are some pretty “blah” areas that could use some touching up. 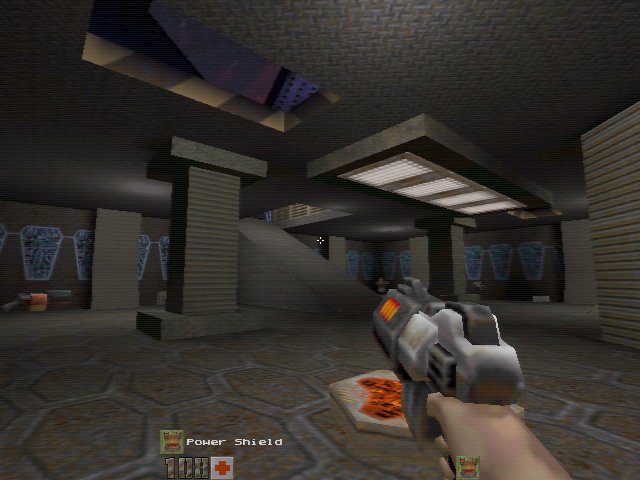 The second installment from the MiLkMaN rightly name “Two” is a step up from his last map “One.” This map is bigger then his last and provides a bit more fun and freedom of movement. It has big open areas which should proove to be intresting and useful on defense and offense. With the aid of the grapple you should be able to get some useful tools that will help you clear those big rooms. :-) This map should be able to hold about 16 player with out getting to over stuffed. 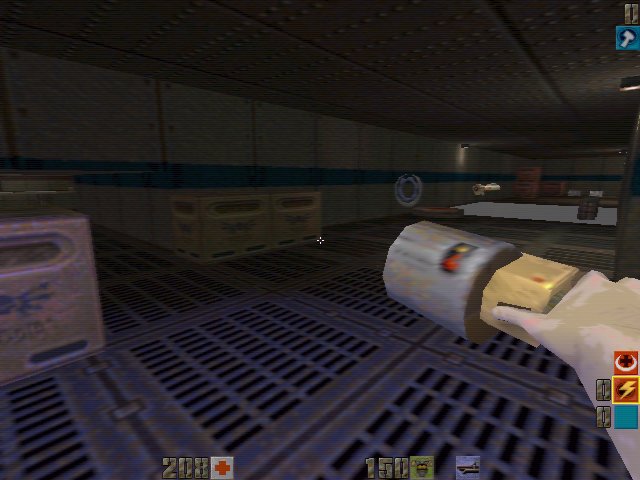 This is another Tumorhead map that is pretty much a copy of Well6 map from Team Fortress for Quake1. I was fond of the orginal Well6’s wide open areas and was kinda dissapointed when I saw that Tumorhead had shrunk the map down quite a bit. Besides that this map is great. It flows nicely from place to place and is easy to get around in. This map should be able to hold 12 people at the max, but it would most likely be best for 4 on 4 matches or some thing like that. 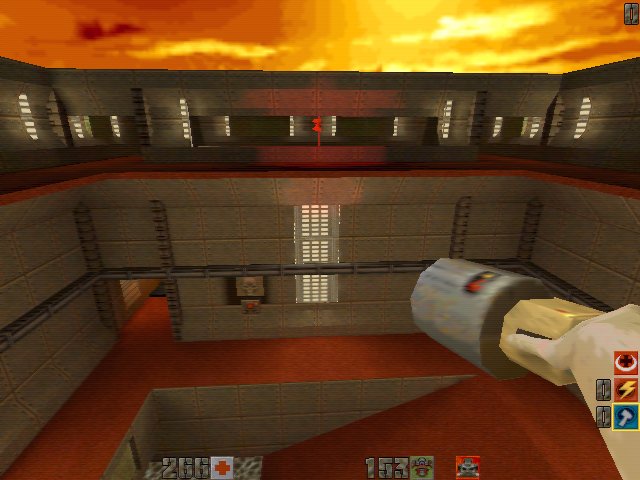 Is Tumorhead on speed or something? He must be to keep pumping out all of these exellent maps! I heard that he has gone on vaction this week though and I think he deserves it. This is an excellent map. It playes well, but the one problem is that the mid field game can be kinda slow because of the fact that it mostly takes place in water. The other thing I like about this map is that the flag is right out in the open. This map is a team fortress feel to it much like all of Tumorhead’s maps. As he said in his e-mail this map is best played with the Weapons Factory mod. 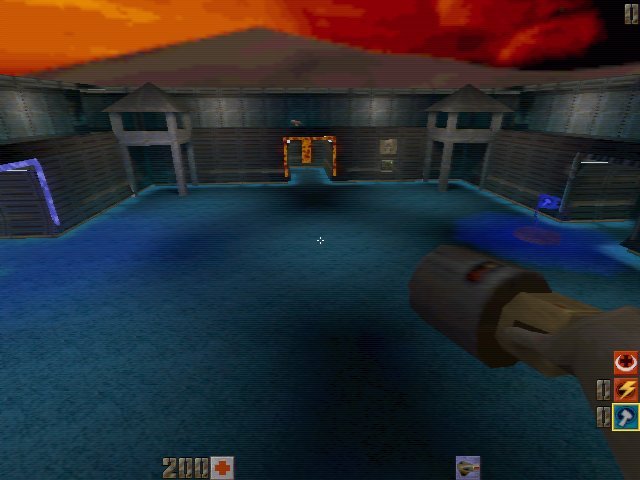 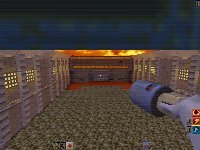 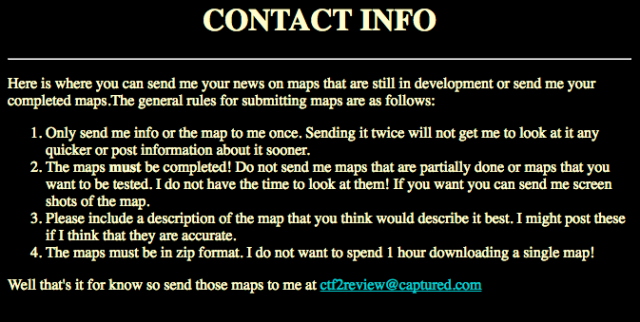