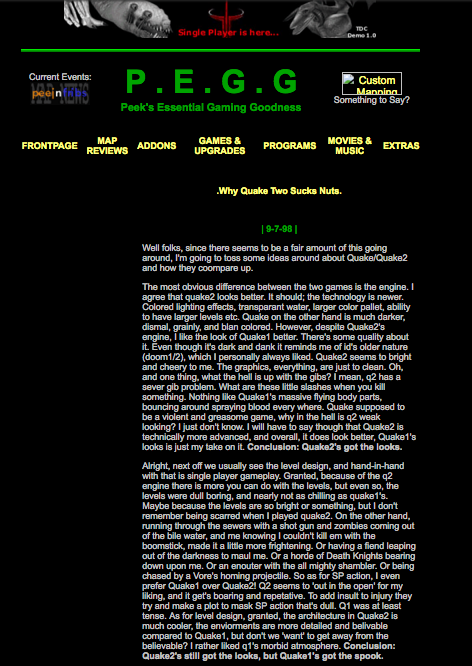 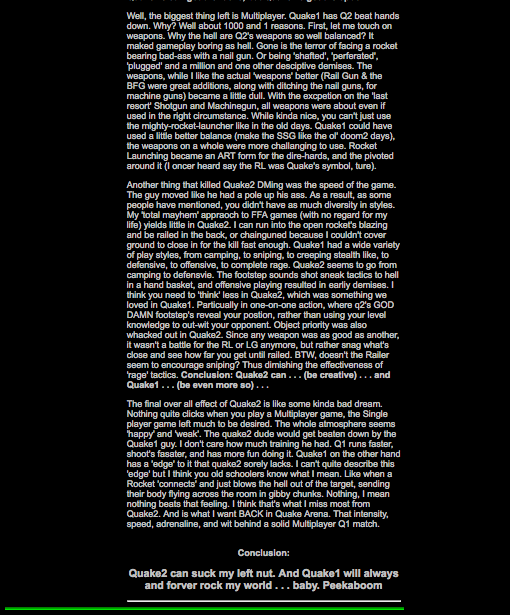 Well folks, since there seems to be a fair amount of this going around, I’m going to toss some ideas around about Quake/Quake2 and how they coompare up.

The most obvious difference between the two games is the engine. I agree that quake2 looks better. It should; the technology is newer. Colored lighting effects, transparant water, larger color pallet, ability to have larger levels etc. Quake on the other hand is much darker, dismal, grainly, and blan colored. However, despite Quake2’s engine, I like the look of Quake1 better. There’s some quality about it. Even though it’s dark and dank it reminds me of id’s older nature (doom1/2), which I personally always liked. Quake2 seems to bright and cheery to me. The graphics, everything, are just to clean. Oh, and one thing, what the hell is up with the gibs? I mean, q2 has a sever gib problem. What are these little slashes when you kill something. Nothing like Quake1’s massive flying body parts, bouncing around spraying blood every where. Quake supposed to be a violent and greasome game, why in the hell is q2 weak looking? I just don’t know. I will have to say though that Quake2 is technically more advanced, and overall, it does look better, Quake1’s looks is just my take on it. Conclusion: Quake2’s got the looks.

Alright, next off we usually see the level design, and hand-in-hand with that is single player gameplay. Granted, because of the q2 engine there is more you can do with the levels, but even so, the levels were dull boring, and nearly not as chilling as quake1’s. Maybe because the levels are so bright or something, but I don’t remember being scarred when I played quake2. On the other hand, running through the sewers with a shot gun and zombies coming out of the bile water, and me knowing I couldn’t kill em with the boomstick, made it a little more frightening. Or having a fiend leaping out of the darkness to maul me. Or a horde of Death Knights bearing down upon me. Or an enouter with the all mighty shambler. Or being chased by a Vore’s homing projectile. So as for SP action, I even prefer Quake1 over Quake2! Q2 seems to ‘out in the open’ for my liking, and it get’s boaring and repetative. To add insult to injury they try and make a plot to mask SP action that’s dull. Q1 was at least tense. As for level design, granted, the architecture in Quake2 is much cooler, the enviorments are more detailed and belivable compared to Quake1, but don’t we ‘want’ to get away from the believable? I rather liked q1’s morbid atmosphere. Conclusion: Quake2’s still got the looks, but Quake1’s got the spook.

Well, the biggest thing left is Multiplayer. Quake1 has Q2 beat hands down. Why? Well about 1000 and 1 reasons. First, let me touch on weapons. Why the hell are Q2’s weapons so well balanced? It maked gameplay boring as hell. Gone is the terror of facing a rocket bearing bad-ass with a nail gun. Or being ‘shafted’, ‘perferated’, ‘plugged’ and a million and one other desciptive demises. The weapons, while I like the actual ‘weapons’ better (Rail Gun & the BFG were great additions, along with ditching the nail guns, for machine guns) became a little dull. With the excpetion on the ‘last resort’ Shotgun and Machinegun, all weapons were about even if used in the right circumstance. While kinda nice, you can’t just use the mighty-rocket-launcher like in the old days. Quake1 could have used a little better balance (make the SSG like the ol’ doom2 days), the weapons on a whole were more challanging to use. Rocket Launching became an ART form for the dire-hards, and the pivoted around it (I oncer heard say the RL was Quake’s symbol, ture).

Another thing that killed Quake2 DMing was the speed of the game. The guy moved like he had a pole up his ass. As a result, as some people have mentioned, you didn’t have as much diversity in styles. My ‘total mayhem’ appraoch to FFA games (with no regard for my life) yields little in Quake2. I can run into the open rocket’s blazing and be railed in the back, or chainguned because I couldn’t cover ground to close in for the kill fast enough. Quake1 had a wide variety of play styles, from camping, to sniping, to creeping stealth like, to defensive, to offensive, to complete rage. Quake2 seems to go from camping to defensvie. The footstep sounds shot sneak tactics to hell in a hand basket, and offensive playing resulted in earliy demises. I think you need to ‘think’ less in Quake2, which was something we loved in Quake1. Particually in one-on-one action, where q2’s GOD DAMN footstep’s reveal your postion, rather than using your level knowledge to out-wit your opponent. Object priority was also whacked out in Quake2. Since any weapon was as good as another, it wasn’t a battle for the RL or LG anymore, but rather snag what’s close and see how far you get until railed. BTW, doesn’t the Railer seem to encourage sniping? Thus dimishing the effectiveness of ‘rage’ tactics. Conclusion: Quake2 can . . . (be creative) . . . and Quake1 . . . (be even more so) . . .

The final over all effect of Quake2 is like some kinda bad dream. Nothing quite clicks when you play a Multiplayer game, the Single player game left much to be desired. The whole atmosphere seems ‘happy’ and ‘weak’. The quake2 dude would get beaten down by the Quake1 guy. I don’t care how much training he had. Q1 runs faster, shoot’s fasater, and has more fun doing it. Quake1 on the other hand has a ‘edge’ to it that quake2 sorely lacks. I can’t quite describe this ‘edge’ but I think you old schoolers know what I mean. Like when a Rocket ‘connects’ and just blows the hell out of the target, sending their body flying across the room in gibby chunks. Nothing, I mean nothing beats that feeling. I think that’s what I miss most from Quake2. And is what I want BACK in Quake Arena. That intensity, speed, adrenaline, and wit behind a solid Multiplayer Q1 match.

Conclusion:Quake2 can suck my left nut. And Quake1 will always and forver rock my world . . . baby. Peekaboom