This section of Quake, the Universe, and Everything is for stories and prose, humorous or otherwise. I’ve written a short sample, as you can see at right (at the end). I’ll accept any entry as long as it’s fairly well-written. This means check your p’s and q’s, kids. I don’t like spellchecking and I will have no spelling or grammatical errors on my site. No punctuation errors, either. If you don’t know how to write properly, then use my writing as an example. Not to gloat, but I tend to get A’s on all my English papers. :)

At this point I should make it clear that under the catch-all of “stories and prose,” I mean to include fiction, nonfiction, stories about things that have happened to you while playing Quake, things you’ve seen, and whatnot. While the emphasis is on creative fiction, any kind of prose about Quake is fine.

The Stories & Prose page sprang from the Haiku page, which was originally created by Dragoon. I am no longer accepting story/prose submissions.

F
Spiteful Existence – by TheZorkOne.
A story of a soldier’s experience with the unknown.
Fiendish Perspective – by Chameleonn.
A fiend grants an interview from his cell.
The Attack from Necropolis – by GruntFaceKillah.
A fighting squadron laughs its way to destruction.
Don’t Fear the Reaper – by Brennen Bearnes.
An abandoned soldier finds purpose in life.
Monk-E’s Revenge – by Monk-E.
CTF champions duke it out.
DemoMan Attacks! – by Dan the Burke.
A third Teamfortress story, this time from the DemoMan’s point of view.
Rhythm – by SpudGasket.
A sniper’s tale.
The Last Frontier – by SpudGasket.
A TeamFortress defender makes his last stand.
The Shambler – by Brennen Bearnes.
The soldier makes a friend.
One Day at a Time – by Maelstrom.
The Quake soldier survives. 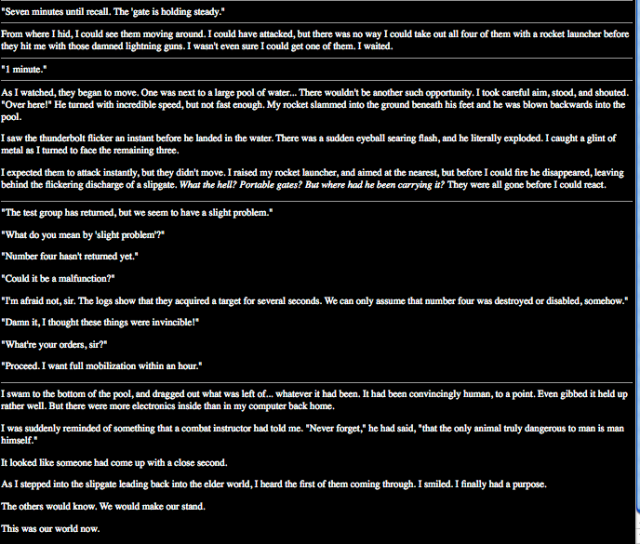