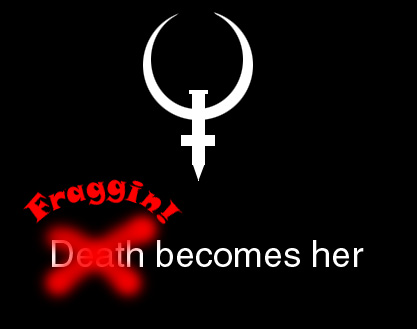 How long did it take you to make the change from Quake 1 to Quake 2? It took me two full weeks to admit that it was fun. Now I’m addicted. My admiration for Q2 is not based only on the wonderful colors and lighting effects that come with a 3D card but now I enjoy the levels and range of weapons as well. Yet, I still love Q1, even without a 3D card! Not everyone feels the same. It seems there are a large number of people who are still dedicated to Q1 and disapprove of Q2. It is likely that there are Q2 players who denounce Q1 but they do not seem to be as vocal about their preference. For one thing, Q2 players do not have to worry about the dwindling numbers of people available for a 3:00 AM game.

Many people have looked unfavorable on the weapons in Q2. It seems the hard core Q1 players are not comfortable with the weapons of the sequel, particularly the rocket launcher. As a big fan of the rocket launcher, it was a huge disappointment at first and I still prefer the Q1 RL. However, just lead a little more with it in Q2 and you’re all set. The compensation is that the other weapons (the super shot gun, the chain gun or rail gun, for example) add a new balance to the fray. The ridiculous BFG of course is an oddity, but I suppose with the size of some of those levels the designers thought it would somehow balance out as well. The only BFG level I play is Q2DM2. It’s hard enough to access and the level design contains enough corners that you can avoid an otherwise easy kill. Overall the weapon balance and range in Q2 seems even enough. The RL is still a strong weapon but not as necessary to win a game and that is nice for people who are still learning level control. On the flip side I had a discussion with a friend who believes that the balance is the problem. In short, the lack of power behind the RL means it is not as important to control, detracting from the strategic aspect of the game.

Level design is another hot topic that many people find less than appealing in Q2. Until the DM levels arrived this was my opinion too. While it is hard to match the design of Q1’s DM2, DM4 and the incredible DM6 there are some solid maps in Q2. Most notably Q2DM1 stands out as a balanced and yet competitive map for both 1-on-1’s and some team games. With the addition of Match1 there are a few very strong levels for death match play. As with Q1, I still wish there were a few more official DM levels. For FFA Q2 provides more than enough arenas to satisfy skeptics.

Social aspects of Q2 are influenced by a number of things including level design, mods, and general attitudes of those involved. It has been said that the Q2 crowd seems less supportive online, meaning that there is less positive feedback (“nice shot”, “way to go”, etc.) in the latest version of Quake. Personally, this does not seem to be a major problem from what I have experienced. There is less opportunity to do so in some respects but overall I do not find the Q2 players any less friendly or engaging.

Team play does seem a little less supported in the Q2 community. While there are plenty of clans that take part in team matches, there are not enough servers that run team mods. The duel mod is wonderful but usually allow too few players. Why is that a problem? The problem resides mainly in the fact that with more people in observer mode you get to know people better, receive feedback after games and it is generally conducive to team moral and development. The Rancor mod facilitates this type of interaction but does not seem to have been embraced by the community at large. One shortcoming of Rancor is that there is no chasecam. I remember the good old days when QGirlZ ran a number of server games on a T3 at the University. There were other servers we could frequent as well. We ran the Clan Ring mod and would hang out with our friends and fellow clan mates for hours picking up tricks and playing until the wee hours. We chase camed our friends and kicked rude people when necessary and we all got to know one another while in the process of playing. It is an atmosphere that I miss in Quake2.

Other observations include the lack of shared demos for Q2, especially of the great players of old. And just for the record, yes there are many hard core Q2 players. Many people have implied or otherwise said that Q2 lacked hard core players. That is just not true. There are many new names out there and some old ones. Anyway, there are good places to find demos out there like the YOU 1-vs-1 site but there is a lack of demos by many of the big names in the Quake community. I know many of the great Q1 players are out there pounding away at Q2 but the demos of these games are either non-existent or there is a great conspiracy channeling them exclusively to the Strogg. God save us! Quake1 demos were always considered gems if you could find a Reptile or a Thresh, but you could find them. If you could find a Mike J vs. Thresh well that was a real find, but you could find them.

My hope is that Quake Arena (Quake 3) will blend the best aspects of both games and make for a gaming environment that will set the bar two notches higher. Not everyone will be pleased with Quake Arena just as many people are not pleased with Q2. Personally, I enjoy both games and do not understand the big stink about how Q2 has failed people. Maybe my expectations were different or nonexistent. It was a new game at the time and I recall saying “this is not quake”. Sure enough it was not, but, instead, it’s a game called Quake2. And sure enough my skills transferred from one to the other when I gave myself some time to get familiar with the new game. In my humble opinion Quake1 and Quake2 are both incredible games and there is no reason to take either one or the other. Play them both and have twice the fun!