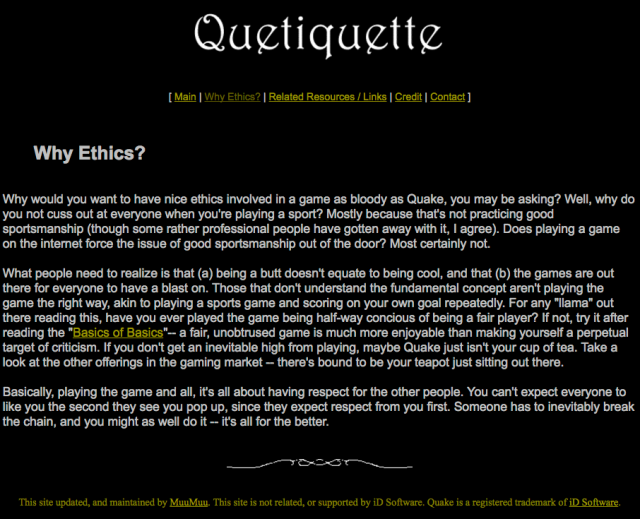 Why would you want to have nice ethics involved in a game as bloody as Quake, you may be asking? Well, why do you not cuss out at everyone when you’re playing a sport? Mostly because that’s not practicing good sportsmanship (though some rather professional people have gotten away with it, I agree). Does playing a game on the internet force the issue of good sportsmanship out of the door? Most certainly not.

What people need to realize is that (a) being a butt doesn’t equate to being cool, and that (b) the games are out there for everyone to have a blast on. Those that don’t understand the fundamental concept aren’t playing the game the right way, akin to playing a sports game and scoring on your own goal repeatedly. For any “llama” out there reading this, have you ever played the game being half-way concious of being a fair player? If not, try it after reading the “Basics of Basics“– a fair, unobtrused game is much more enjoyable than making yourself a perpetual target of criticism. If you don’t get an inevitable high from playing, maybe Quake just isn’t your cup of tea. Take a look at the other offerings in the gaming market — there’s bound to be your teapot just sitting out there.

Basically, playing the game and all, it’s all about having respect for the other people. You can’t expect everyone to like you the second they see you pop up, since they expect respect from you first. Someone has to inevitably break the chain, and you might as well do it — it’s all for the better.

This site updated, and maintained by MuuMuu. This site is not related, or supported by iD Software. Quake is a registered trademark of iD Software.https://web-beta.archive.org/web/20010707052340/http://www.planetquake.com:80/quetiquette/ethics.html&nbsp;