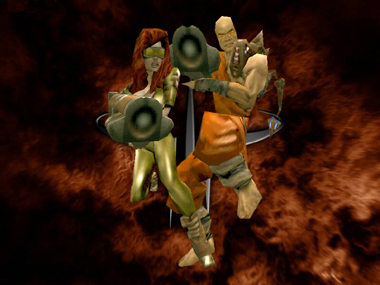 Welcome to RailsOnly.com. This web site has been designed for those of you who frequent the storm.railsonly.com set of Q3 servers. Storm and Thor are your hosts and the server and web administration team.

You’ll find a variety of tools on this site that hopefully add value to your SToRM server gaming experience including:

We try to listen to what people like about the servers as well as what they don’t like – within reason of course ;-) so the voting booth and the forums are the places to submit your feedback.

Server Policy: Our rules are fairly simple – be nice, have fun, and respect one another.

People come here because it’s like a good restaurant or neighborhood bar…it’s about the people and the game. More often than not, you’ll see SToRM in her bartender / bouncer role playing, socializing and keeping the servers free from those who take away from the positive playing experience many of you are so used to here. Thor is typically in the back in his role as cook and chief dish washer making sure things are prepared and running smoothly. We can’t be everywhere all the times but our eyes and ears are extensive and we receive updates from many of our friends on what is going on day to day.

Kicking and Banning policy: No matter what anyone says about how we handle things, we don’t get off on pushing people around or displaying our “power” as admins. Creating a positive gaming environment involves hard work on our part as well as on the part of those who help foster it. To that end, you’ll find that although we laugh and have a lot of fun, we run tight servers and don’t tollerate rude or disrespectful behavior toward others. Those who disregard the rules will first be given a warning. If that doesn’t work, they will be kicked and finally, as a last resort, they’ll be banned from the server and the web site. We have also been known to ban for the use of aimbots of any kind (don’t ask us how we know you have one… it’s our secret ;-). If you don’t want this type of trouble, keep your bots out while you’re playing here.

Who are we and what’s behind all this? Well, we’re a “grown up” couple doing this for fun and to give something back to the gaming community. We started all this because we wanted to provide a place where people could come, have fun playing and not worry about the typical BS that goes on in many other servers. It has evolved over time, but that’s basically it. Our server policy reflects our value system and while we may use a few choice words at times ;-) , we do ask that you refrain from saying G** D*** on the servers.

Storm and Thor are married and live in Atlanta, GA where the servers are also located.