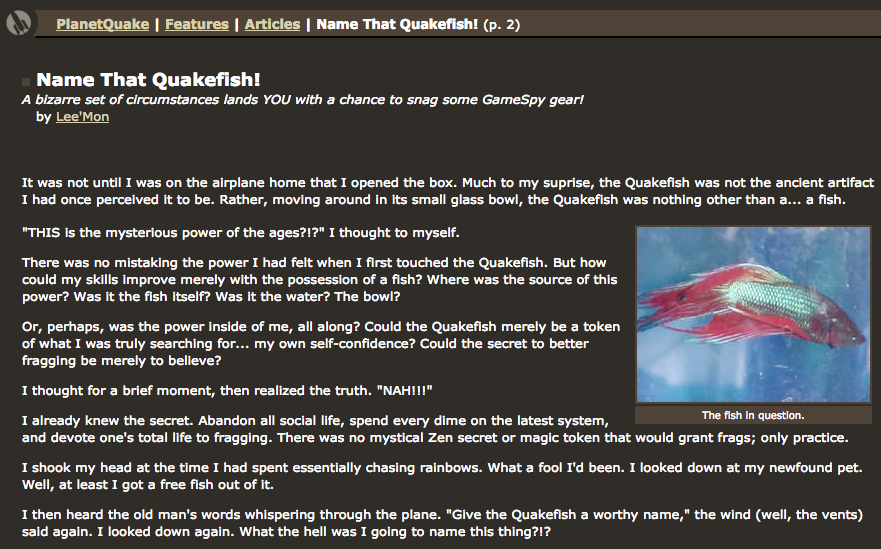 A bizarre set of circumstances lands YOU with a chance to snag some GameSpy gear!

The cab dropped me off in a run-down section of Tokyo. The stranger that had driven me here sped off before I had a chance to close the car door. I took a long look at the building that stood before me, even as it seemed to crumble at my feet. Surely this could not be my final destination, the source of all that I had been searching for… ?

Undaunted, I shook my doubts from my head, and approached the entrance. However, as I reached for the handle, the door opened. A beautiful Japanese lass, wearing a kimono that would look utterly plain on anyone else, smiled at me. “We’ve been expecting you,” she said in calm but not quite fluent English. “Come this way.”

I entered, pausing to remove my shoes at the door. The girl led me to a back room, where a wizened old man sat with a small black box.

I nodded my head slowly. “The Quakefish.”

“Well, my dear boy, your searching has at last come to an end.” He held out the box.

With hands trembling, I accepted the box. Upon touching it, my entire body surged with tremendous energy, much like the power rush an Arena gladiator must receive upon grabbing the Quad. I knew then that my search was over.

I began to reach for my wallet, but the old man raised his hand. “I ask for no payment. However, by accepting the Quakefish, you accept a great responsibility. There exist one in your inner circle who would cause great pain to others if he were to obtain the Quakefish.”

The old man thought for some time. “No, but do remind your friend Fargo to seek me out soon,” he replied. “I refer instead to your long-time fisticuff rival.”

“Spyke!” I shouted. A long time ago, we had both trained at the Olde Skul Academy of Quaking. However, a bitter rivalry had forced us to walk separate paths in life. Fate, it seemed, was not without a sense of humor, as it paired the two of us together again, at PlanetQuake. It was all the fellow staffers could do to keep our bloodshed penned up inside the Gauntlet and the Arenas Eternal. We were the Ryu and Ken of the Quake universe.

“Yes,” the old man nodded. “Terrible things will befall this world if Spyke should obtain the Quakefish. You must take great care not to let this power fall into evil hands.”

“I will, sir,” I bowed respectfully.

“Very good. Now go forth, and use the power of the Quakefish for good.” I rose and began my way out of the building. As I passed out the doorway of the room, the old man called out. “One more thing!”

I stopped, and turned around.

“Give the Quakefish a worthy name,” he smiled.

Puzzled, I turned around and left.

“THIS is the mysterious power of the ages?!?” I thought to myself.

There was no mistaking the power I had felt when I first touched the Quakefish. But how could my skills improve merely with the possession of a fish? Where was the source of this power? Was it the fish itself? Was it the water? The bowl?

Or, perhaps, was the power inside of me, all along? Could the Quakefish merely be a token of what I was truly searching for… my own self-confidence? Could the secret to better fragging be merely to believe?

I thought for a brief moment, then realized the truth. “NAH!!!”

I already knew the secret. Abandon all social life, spend every dime on the latest system, and devote one’s total life to fragging. There was no mystical Zen secret or magic token that would grant frags; only practice.

I shook my head at the time I had spent essentially chasing rainbows. What a fool I’d been. I looked down at my newfound pet. Well, at least I got a free fish out of it.

I then heard the old man’s words whispering through the plane. “Give the Quakefish a worthy name,” the wind (well, the vents) said again. I looked down again. What the hell was I going to name this thing?!?

Our resident ranter, Lee’Mon, has mysteriously obtained a Japanese fighting fish that requires a name. In true lunatic fashion, Lee’Mon has demanded that this “Quakefish,” as he calls it, have the best Quake-related name available. Unfortunately, due to his current mental state, Lee’Mon lacks the mental capacity to devise such a name for himself.

Consequently, we thought we’d dig up some GameSpy gear, and make a contest out of it!

Put on your thinking caps, and email Lee’Mon with your own original suggestions for Quakefish names. The rules are as follows:

1. The name must be based on one of the following sources:

A. The Quake and/or Doom series of games
B. PlanetQuake, its staff, or any of its hosted sites.
C. Any well-known modification for Quake/Quake II/Quake III Arena.
D. EXTREMELY well-known members of the Quake community (translation: Lee’Mon must have heard of them.)

2. The name should be relatively suitable for a fish.
3. The only explicitly forbidden name is “Dopefish.” It’s far too easy.
4. You may use one of the bots from Q3A as a name, but you must give a good reason why it should be named for that bot.
5. In case of duplicate names, the first one in Lee’Mon’s email Inbox gets the credit.
6. All Quakefish name-related decisions, including entry order and the official name of the Quakefish, are the decision of Lee’Mon, and are final.

Email your suggestion to leemon@planetquake.com. Please include “Quakefish” in the subject.

Entries are due by midnight on Friday, April 21st. Lee’Mon will select the best entries over the weekend, and the winner will be announced on Monday, April 24th.

So get out there, and start naming!