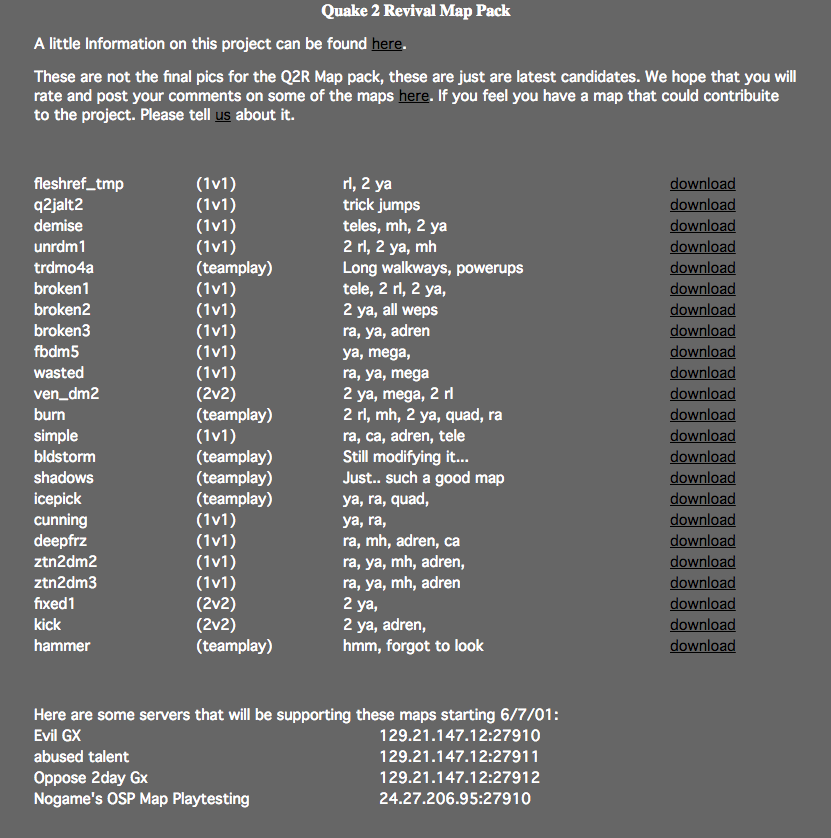 The Future of Quake 2

Sean asked me to write a column for the a16 clan and I thought it would be a good idea to stray from the topic of the tournament and write about something that everyone cares about.

I have been playing Quake 2 online since a month after it hit the store shelves. I’ve had my share of tournaments, ladders, and competitions and have seen a great deal of people come and go. I’ve seen the golden days of Quake 2 and of course the aftermath we live in now.

When I returned to Quake 2 about eight months ago, I was playing only for

shits-n- giggles. There weren’t that many people I couldn’t beat and the only map played was Q2DM1. Styles of play had definitely changed quite a bit. Unfortunately, the game had gotten dumber. What do I mean? Well, the game depended on strafe jumping and aim as opposed to good decision-making and smart game play. People are only now starting to come around to this concept once again.

After noticing these changes I decided to play on the OGL 1 v 1 ladder to see how good the competition was. Once again, very disappointed with the level of play, I reached the number one spot in only 5 games, the best score against me being 7-28. Throughout this little process ‘KARN’ was the only player who challenged me to a map other than Q2DM1. Go KARN!

Now, I see a few really big factors coming into play that could directly affect the future of the Quake 2 community. There are some great ladders and tournaments taking place and some great new game play coming from them.

OGL was the first introduction to this new era. OGL has now completely changed from hoping to taking action to give itself more credibility. This is a great sign for our community! Perhaps this will motivate some people to actually play with their clan instead of against their clan mates for only 1v1 purposes. Throughout the Quake 2 history, there have never been more than five top-spot contending teams at any one point in time. Making a contending team takes effort from each and every player in the squad. Finding a team dedicated enough to the clan (also given the raw talent) to get to #1 or close is also a very big task.

In our community though, there is a different feeling to a clan. A clan is made now made only to give some form of label to a group of people. Recently, being in a clan together doesn’t necessarily mean that you are teammates; it only means that you bare the same tag in the front of your name as the rest of your clan mates do. All too often, I see clan mates on the same server joining an opposing team because it has a better player than their clan mate. When a clan match actually does take place, people aren’t using binds! This is one of the most striking changes in the current community since when I used to play. Back then, every clan had their style of binds and every teammate knew them. It wasn’t uncommon to find clanless players that had their own binds that they knew and practiced well. The question wasn’t “do you have binds?” it was “are you good with your binds?” Getting back to the subject, maybe the new OGL will instill life into our team play community once again. At this point it is desperately needed.

The biggest jump I’ve seen (in which I possess a biased opinion) is in the a16 tournament. Thank you very much a|v; this is exactly what the community needed. A strong sense of competition, some games played on oldie-but-goodie maps, and a high level of skill among the participants (hehe) all contribute to make this a much-needed shot in the arm for the Quake 2 community. There are many varied aspects of ‘good’ coming from this tournament; it’s quite intriguing. As far as competition goes, can you feel it getting stronger? People are actually getting nervous and excited to play these games. As for me, my blood gets going, and I get to feel that rush that I used to feel when I played Quake 2 in the CPL or PGL. Also, the addition of new maps is a great breath of fresh air into the community. I say “new” because the maps (ztn2, ztn3, match1, even dm3) aren’t played heavily at all anymore. Since the tournament has only 16 players, however, the scope of competition doesn’t reach as far as it could. At least the maps are there and being played again. The tourney is definitely a start.

And in World <a href=”index.htm”>news</a> Today, the CPL announces that the CPL championship will now be a counterstrike tournament! Boo-Boo-Hiss-Hiss! What that means, ladies and gentlemen, is that Quake 3 will be drying up soon. The prize money is gone, and so are the better players. This means that the lesser players might still keep playing, but we’ll definitely see some familiar faces come back to Quake 2. Some have already started playing again. Matlock, DethKnite and Sarge P Doom are all old friends that once had their day in the limelight of Quake 2. You can be sure to see plenty of talented Quake 2 players coming back from retirement in the near future. This will also bring the level of competition a little higher.

With all these things in mind, the introduction of the new OGL, the a16 tourney (and the others a16 and other clans will host in the future), as well as the Quake 3 people coming back to Quake 2, it makes the game seem a little more exciting again. Some people aren’t in this game to compete, and that is completely fine. However, competition is known for getting the community excited and practicing towards something other than winning a game on Q2DM1.

Another factor in the success of the Quake 2 community in the future will hopefully be my clan. My clan has unarguably some of the more talented players in the game today and we are trying to up the ante in Quake 2 teamplay competition. This paragraph isn’t to brag about my affiliation, but to help others become better players. Doze and I are currently writing a series of essays about improving your Quake 2 abilities as well as strats on levels and other Quake 2 related issues. We will post them on the ‘strat’ page of our website () with hopes that everyone can educate themselves and become as good of a player as we’d all love to be.

I’ve been around for a long time, and there was a time that I wouldn’t have wanted to share the knowledge that I had with others, because I wanted to stay on top of the heap. If I stayed in that kind of mentality, if we all do, the only things growing are our ego and shitty attitude. By helping other players raise their level of competition, it will in turn make the community stronger, larger, and better. At this point, that is exactly what the community needs. The players in my clan are foremost only because of their respect towards others and their gaming ability. I do hope that our ramblings on the strat board will help every gamer to gain at least a trick or two, and help them stay alive a little longer.

So how does the future of Quake 2 look? It depends on you, and how you choose your path. You could compete, and try to raise your abilities, and maybe even strive for that number one position! [ed. note- hehe, don’t get corny on us ng] Or perhaps you could just make yourself a better teammate, and play with your clan mates more often. The only absolute truth is that if you treat others with as much respect as possible, you will gain a stronger reputation and you will improve your playing ability indirectly. I for one will never give tips to someone who just treated me like an asshole, and most people believe the same.

Your first step into the future, is a tip that I give to you:

That’s my essay; I hope it has been informative and thought provoking. Feel free to stop by the channel on enterthegame #[demise] and say hi. 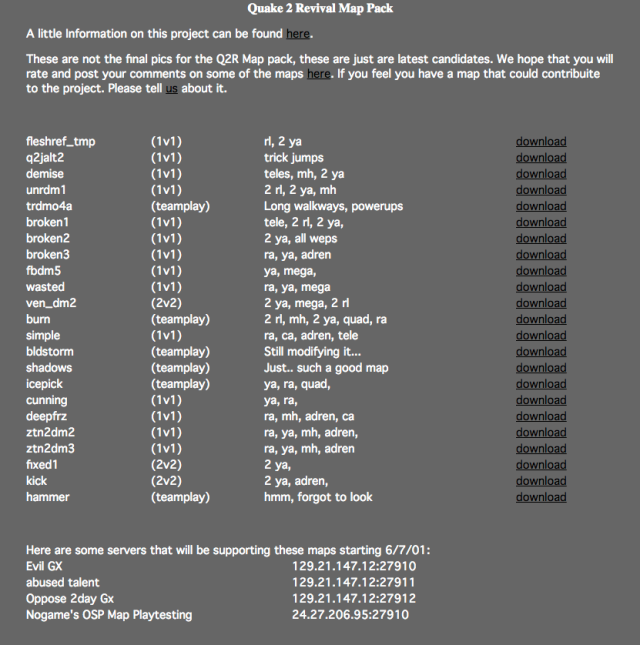