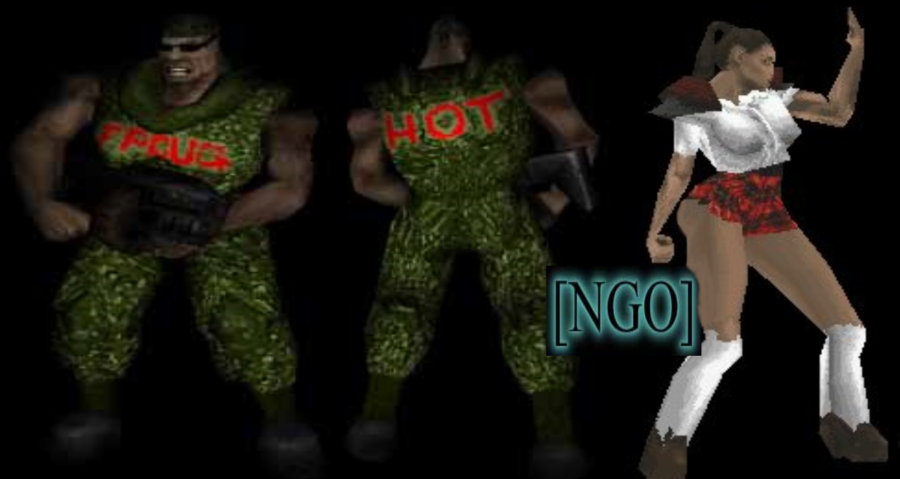 This clan is proud, the work of Denpa Skinner Pri-San, the theme is HOT and “funky!” Back is Masu Ikashite.

This is also a work by pri-san, Sara of the virtual fighter. I feel the energy of pri-san ‘s fineness in the depiction of the buttocks (laugh).

At the time of 1994 … Windows was still 3.1, CPU was at 486’s peak, and modems were around 96 or 144 … Net gamers paid nifty for 10,000 yen, found Ments in chat, and played a direct line. Around that time , among the monkeys nesting in the special meeting room for DOOM battle at nifty, it seems that the same local Clan who had cheap direct line bills gathered and Clan was born. The name of the Chubu district (Dai-Nagoya DOOM Communication Battle Promotion Association) followed by the West of the Kansai district (Kansai DOOM Strengthening Committee) Inspired by that, there seemed to be a lot of local involvement in various parts of Japan. At that time, DOOM Ladder was held in the process of competing for his skill. In the meantime, with the introduction of America Rika, it seems that the mainstream mouse + EDSF key binding in Japan now spread.

Eventually, the mainstream of the battle changed from DOOM to QUAKE instead of direct line to the Internet, but the person who gave up due to the performance of the machine and the speed of the corrupt provider. People who could not concentrate on the world view of Hermetic and QUAKE, and people who were not familiar with the change from pseudo 3D to 3D. For each reason, they seemed to be away from online competition and only played a trial version of this kind of game. I heard rumors that the QUAKE2 in 1998, when the times changed , and the quality of propipators became a competition for quality of ISDN and SLOT1, but … When I saw single play, the story escaped from the enemy base. I’m not familiar with the magical world, there are also BFGs, big brother! What happened to the hit decision, this is DOOM’s return! When I try to play the Internet, it’s different from the old rotten candy PING 1500 over! You don’t have to find a colleague in a chat.

With that kind of feeling, NGOs are a promotion group for telecommunications battles centered around QUAKE2, which was started by members of the old name and Nishido strong. By the way, what NGO stands for is Net Gamer’s Organization of Central and West Japan. Originator of Clan originator (Nagoya, Nishinomiya, Gifu, Osaka) Neanderthal Godfosaken Oralsex, etc. There are various theories, but they are currently the subject of discussions at academic societies, and there is no unified view. (^^)