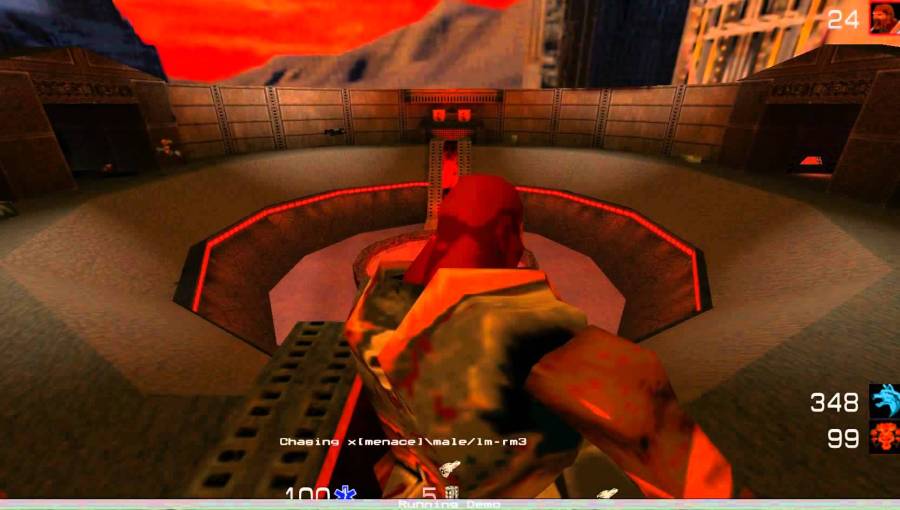 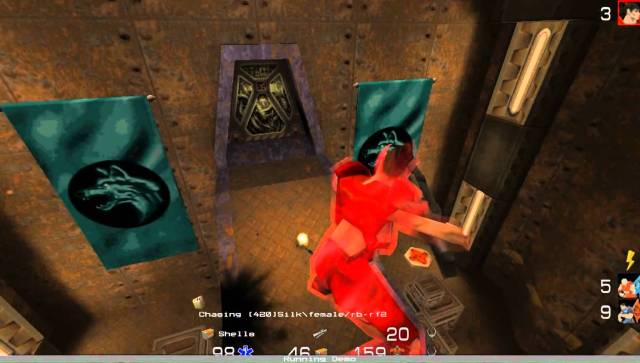 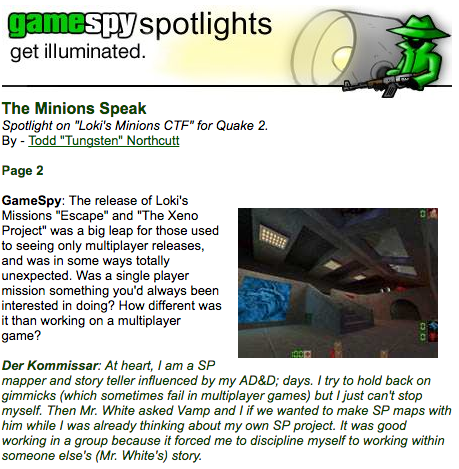 GameSpy: The release of Loki’s Missions “Escape” and “The Xeno Project” was a big leap for those used to seeing only multiplayer releases, and was in some ways totally unexpected. Was a single player mission something you’d always been interested in doing? How different was it than working on a multiplayer game?

Der Kommissar: At heart, I am a SP mapper and story teller influenced by my AD&D; days. I try to hold back on gimmicks (which sometimes fail in multiplayer games) but I just can’t stop myself. Then Mr. White asked Vamp and I if we wanted to make SP maps with him while I was already thinking about my own SP project. It was good working in a group because it forced me to discipline myself to working within someone else’s (Mr. White’s) story.

Mr. White: I always wanted to try my hand a single player mapping. It’s a totally different experience as you’re concerned with 1 player progressing through a series of levels where certain goals have to be met and results have to happen….unlike DM or CTF which is just an arena for fragging where game flow becomes the focus. The release of Half-Life furthered my interest in SP mapping as all sorts of possibilities opened up for scripting and such. The down side of SP is that once you’ve played it, it’s over…unlike DM or CTF which can be played on the same maps for years without getting boring.

Vampire: Up until that point I had never considered making a single player map. All the mapping I had ever done was for multiplayer as I always thought that a single player map only lasts as long as it take to play it once. But then Mr.White presented DK and I this idea he had and I really had to jump in. After all, I knew I would be able to work well with the team. ;). But in this particular project I was really excited because it was my chance to really stick my hands into the code and make a whole new monster that used the existing Plasma Rifle from LMCTF.

batstone: I didn’t have too much to do with that besides some minor coding, so I can’t take much credit, but I would further like to add that sometimes when I’m bored I will ride my bicycle into a brick wall at high speeds, then when I’m done I will get back on the bike and do it again. Do you remember those Big Wheels we used to ride when we were kids? Those rule. Sometimes I ride my big wheel into a wall too.

Der Kommissar: For Q2 SP maps, I’m very surprised Escape did so well. I’m holding back for Q3 editing or any engine that allows us to create rooms with more polygons without loss of frame rate. Don’t underestimate the influence a higher polygon count can have on a SP experience; detail and drama made possible by efficient polygon rendering should really blow people away. I’m already drafting sketches for a SP mission… but this is more than a year away from release. Soon it’s all going to be about LMCTF for Q3.

Mr. White: LMCTF for Q3 will be a priority but you’ll definitely see more releases from Loki’s Missions. Right now I’m working on ‘The Xeno Project 2’ for HL. I think ‘Escape’ was the last thing we’ll do for Q2 but I’m dying to see what we can do with the Q3A engine in single player.

Vampire: I really didn’t expect Escape to take off like it did! But so far I am only planning on tinkering with the Q2 LMCTF code, trying out some of the cool ideas we have on our list, in preparation for Q3. But you never know when White might have another cool idea that will get me going.

batstone: Hopefully there will be some more single player games, ’cause the first one these guys did kicked some major frickin’ aZZZZZZ, and I’m not just saying that because I am on the dev team. I really mean it. If there were like a contest of single player mods, we would have take 0th place. That’s like one better than 1st place. Ours go to eleven.

https://web.archive.org/web/20040909230735/http://archive.gamespy.com:80/legacy/spotlights/lmctf.shtmGameSpy: Both Quake 3 and Unreal Tournament are scheduled to include CTF right on the CD. Do you think this will have an effect on the CTF mod community. Would you care to share your opinion on the future of CTF mods in particular and mods in general?

Der Kommissar: Q2CTF never really impressed me but id’s Q3CTF is going to be downright awesome. Zoid’s showed me a couple things they were doing/considering and I was genuinely dumb struck. Q3CTF will not only be fine-tuned but revolutionary. But I believe multiplayer mods won’t be as popular for Q3 as they were for Q2, that is to say, there will be more people playing them, but fewer mods. Q2 multiplayer was hampered by it’s SP support and frankly, there was room for multiplayer improvements and tweaks. Not so for Q3. id’s work is going to be one tough cookie to measure up to. Also, download sizes will be bigger: Q3 maps, 24-bit textures & skins are much bigger than Q2’s and people will be less likely to download tons of 40+ MB files. On the development end, Q3 mapping is almost certainly going to be more difficult and demanding on the system, fewer people will be able to dedicate themselves to this time-consuming art. Furthermore, RPG’s (i.e., Diablo 2, Evercrack), Tribes, TF2, UT, Halo, etc. are all going to be popular. In the days of yore, Quake mods were the only exceptional online games. The Quake “platform” will still be #1 but nothing like the glory days of Quake hegemony.

Mr. White: DK’s right….Q3ctf is going to be hard to beat. I still think that ID will have to keep it fairly simple and straight forward though, which leaves some room for the mods. We have a lot of ideas for our own mod, we’ll just have to see what features ID includes and where we can improve the game.

Vampire: There seems to be a lot of CTFish games coming out in the near future so it will be hard to come up with some original ideas but we have a list, a long list. One of the best things is that we are public players ourselves so we get to hear a lot from other players and their ideas. It’s nice to have such a large sounding board. But for me it is the creation of the mod that turns me on.

batstone: Q3CTF will definitely be great, but you’ve heard of the saying, “Once you get the offhand grapple, you never go back.” I think overall there will be fewer mods for Q3.

GameSpy: Can you single out any one moment during this Loki’s Minions experience that shines as your highest moment? How about a lowest point during it all?

Der Kommissar: My highest moment was umm…. hmmm, I can’t think of any exceptionally good moments. Hmm, that ain’t too good, is it?! I would have to say whenever I really get cruising on level design I hit 80+ hours a week for a month or so and just LOVE it. Lowest point? The custom sky in my hella-awful map Neurothon crashed people in software mode. I finished it days before we released LMCTF 4.0 and it never got playtested properly and ended up laggy and unplayable in every way imaginable. At the time I didn’t know excessive sounds or transparent objects would be so unwieldy. Live and learn I guess. :-(

Mr. White: Highest moment — That would have to be our many release dates. Of course there are always some problems and bug reports that’ll make your heart sink but that’s outweighed by the overwhelming appreciation that people have shown us. Lowest moment — When my ADSL broke for a week and I had to use dial-up 56k to play on-line games.

Vampire: The highest moment is the very second when I do the very final compile of a map I have been working on for months. Or seeing the plasma soldier actually firing plasma at me. Now that was freaky! The lowest moment would be every time I go on a public server and someone kicks my sorry butt all over a map that I designed. Isn’t there a rule against that?

batstone: My highest moment is when I go on public servers and kick Vampire’s sorry butt all over the maps he designed. I have made tons of friends on line and lately have been going to LMCTF LAN parties. It’s great to see people playing the mod that I had part in creating. Lowest moment – I used to take things too personal, and people would really get under my skin when they would rip on the mod for stupid reasons and reasons that weren’t even true. However, I have become older and wiser. I still value people’s opinions, but I really don’t get upset about anything people say, unless they are one of my friends. There’s this dude I know named bosstone that plays LM. People often get us mixed up because our names are almost the same. So whenever someone complains about the mod or complains of a “phantom” bug (I never have any bugs ever ever ever), I will just blame it on bosstone. If the dev team finds a bug, I blame that on Hati ’cause he is not around to defend himself.

If you’re interested in learning more about the games now that you’ve heard from the people behind them, we’ve got you covered. Everything you need to get started with Loki’s Minions CTF – from the files available at FilePlanet, to tips, tricks and strategies offered by The Rainbow Bridge, to coverage of clan competition at The Arena – is all right here on the GameSpy Network.