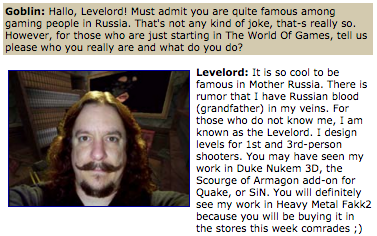 Levelord: It is so cool to be famous in Mother Russia. There is rumor that I have Russian blood (grandfather) in my veins. For those who do not know me, I am known as the Levelord. I design levels for 1st and 3rd-person shooters. You may have seen my work in Duke Nukem 3D, the Scourge of Armagon add-on for Quake, or SiN. You will definitely see my work in Heavy Metal Fakk2 because you will be buying it in the stores this week comrades ;)

Levelord: We are in Dallas, Texas, in the USA. We sort of fell here because most of us started at other game companies that were in the area. I think most game companies are here because of 3D Realms/Apogee and id Software. Now, Dallas is sort of the headquarters for game development.

Levelord: We just liked the name. We try to run the company like a tribe in which everybody is a member and everyone can contribute. This system has its troubles, but we think it is better than the pyramid-shaped management system of most other companies. The name Ritual just sounded cool.

Levelord: I loved working on that project. It was our first for Ritual, and it was the funniest. I made “The Lost Mine”, “Research Facility”, “The Crypt”, “Tur Torment”, and “The Edge of Oblivion (HIPDM1) that started all the platform deathmatch levels of late.

Levelord: As happens in this industry, deadlines are not met. We were pushed out of the door because commitments had been made that could not be cancelled. I wish we could have had 2 more weeks to playtest the game ourselves, but we didn-t. It was a lesson learned, though, and one that won-t happen again ;)

Levelord: Obviously, I really want to be a woman in real life! -oh, sorry ;) We make games for mostly a male audience. This audience wants to see the female body. That simple ;)

Levelord: Our animators did the game from their evil, twisted minds. The game, and movie, are based on Julie Strain, – an incredibly beautiful woman and the wife of Kevin Eastman who owns Heavy Metal.

Levelord: I prefer blonde and young. I have noticed lately how beautiful the Russian woman are, the gorgeous angled faces and bodies that would stop a truck. Then there’s the wonderful Russian accent, makes me melt! I need to come to Russia and have some real vodka and see the women in person ;)

Levelord: It was harder to create a 3rd-person game, at least for me. The framerate is worse because of the player’s character and the levels were harder to control because more was seen in any given view. We went for the 3rd-person, though, so the player could see how gorgeous they were ;) We wanted everyone to see Julie Strain!

Levelord: I am sooo tired right now. We just finished the game and I am now sleeping 18-20 hours a day instead of working ;) Can I simply re-direct the question to all the reviews and run-throughs that are on the internet?

Levelord: I can’t think of all the stuff we did, but anyone who remembers SiN, as compared to Quake 2, will know that we don-t leave anything untouched ;) You will find tremendous upgrades to the engine. So much so that we have actually licensed the tech to other game companies.

Levelord: …no multiplayer because we wanted to focus on the singleplayer game. I think you will be glad that we did ;) The code for multiplayer is there, this is a Quake 3 engine game. We expect a lot of mods and such to fill the multiplayer needs.

Levelord: …done! ;) sorry, comrades, that this interview was so late, but the game is done!

Levelord: I like all music. I like classical, rock, almost everything. Coincidentally, I have been listening to Tchaikovsky and Mussourgsky a lot lately. Something about “A Night on Bald Mountain” that makes a level turn out mean and cool!

Levelord: I have never seen them in concert, and I don-t think they would ever consider doing game music ;( I could never pick my favorite Led Zeppelin song, it would like picking a favorite color or food or position ;)

Levelord: …yes, yes, I have learned this now about Vodka! I want to visit Russia soon because I have so many friends and fans there. We are now hearing many good things about Russia and it sounds like a cool place. I am not much for the “romantic” languages like Italian, French, or Spanish. I like them, but they are not so romantic for me. I prefer Russian and German. When I hear a woman speak either language, my heart melts ;) It must be in my blood somewhere!

Levelord: …and our best to the great gamers of Russia! -you people rule!