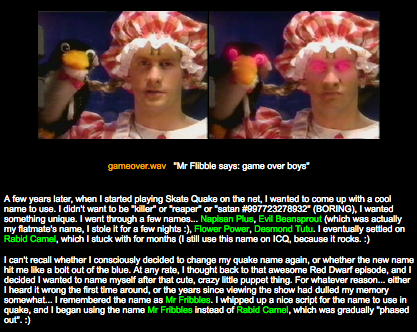 What the hell is a Fribble?

I have been asked that question on a few occasions. Probably not enough times to justify writing this explanation… but hey, it’s my site, and I can do whatever the hell I want, right? In any case, I’d like to try to clarify the origins of the name Mr Fribbles, and there’s a few interesting things I can show you along the way, so what the hell.

Our story begins quite a few years ago, way back when I was in high school. I was with a few friends, watching some old videos of the TV show Red Dwarf. I hadn’t seen the show before this point, and I thought it was a crack up… fucking classic show (I love it, but I’ve only ever seen a handful of episodes. – go figure). My favourite episode was called “Quarantine”… in this episode, Rimmer contracts a holovirus and goes stark raving mad. For the remainder of the show, he goes around with a fluffy penguin hand puppet, which he calls Mr Flibble, terrorising the rest of the crew.

A few years later, when I started playing Skate Quake on the net, I wanted to come up with a cool name to use. I didn’t want to be “killer” or “reaper” or “satan #997723278932” (BORING), I wanted something unique. I went through a few names… Napisan Plus, Evil Beansprout (which was actually my flatmate’s name, I stole it for a few nights :), Flower Power, Desmond Tutu. I eventually settled on Rabid Camel, which I stuck with for months (I still use this name on ICQ, because it rocks. :)

I can’t recall whether I consciously decided to change my quake name again, or whether the new name hit me like a bolt out of the blue. At any rate, I thought back to that awesome Red Dwarf episode, and I decided I wanted to name myself after that cute, crazy little puppet thing. For whatever reason… either I heard it wrong the first time around, or the years since viewing the show had dulled my memory somewhat… I remembered the name as Mr Fribbles. I whipped up a nice script for the name to use in quake, and I began using the name Mr Fribbles instead of Rabid Camel, which was gradually “phased out”. :)

Inevitably, a quake playing mate of mine, Rimmer, pointed out that the character from Red Dwarf was actually called Mr Flibble. However, by this time I had been using the name for a while, and in any case I decided that Mr Fribbles sounded better anyway :). I now had a unique name, which noone else could possibly come up with, and I was quite happy with it.

Incidentally, this was around the time when I formed the clan Electric Fish with Sq, Moo and Silencer… all outstanding quakers and excellent people. But that’s another story. The clan is long gone now, however I continue to use the Electric Fish prefix for my maps, because it rocks. :)

That’s the story of how I came to call myself Mr Fribbles. Obviously, the name has stuck, and I’m still using it to this day. This is quite interesting though – today, I was searching for “Fribbles” on a variety of search engines… to see if I could find my web site, or any remnants of previous pages I’ve had on the web. A search for Fribbles on Yahoo gave me this site: 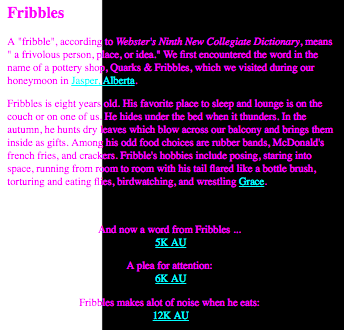 No, it’s not my map page, or anything belonging to me. This is the home page of Fribbles the cat. Check it out, it’s even got sound files of Fribs the cat… hehehe. This is interesting enough in and of itself, the simple fact that someone or something else has been called Fribbles. So I wondered, what’s the go here? The answer to this question was immediately forthcoming (allow me to quote from the page):

A “fribble”, according to Webster’s Ninth New Collegiate Dictionary, means ” a frivolous person, place, or idea.” We first encountered the word in the name of a pottery shop, Quarks & Fribbles, which we visited during our honeymoon in Jasper, Alberta.”

This was rather intriguing… I had absolutely no idea that fribble was actually a word. A quick check of dictionary.com gave me these definitions:

fribble \Frib”ble\, v. i.
1. To act in a trifling or foolish manner; to act
frivolously.

Most people that have played quake online with me would probably agree that these descriptions are remarkably appropriate to me :). Is this an amazing coincidence? Or maybe I was subconsciously aware of the meaning of “fribble”, and thus adapted “flibble” to suit my quake-playing persona better? Ooooh spooky. :)

Well, there you have it. I doubt that anyone cared about the origin of my name, but on the off-chance that you were interested, hopefully I’ve satisfied your curiosity. I hope this doesn’t come across as pretentious, and I was not trying to say “hey, look at me, I’m important!!”. I was bored, I found this stuff interesting, and I hoped that others could possibly get some enjoyment or amusement out of it. If you’ve read this far, chances are I was right… or maybe you’re just monumentally bored. :)

I’ll leave you with this Flibble link, check out the song, it’s a classic. :)