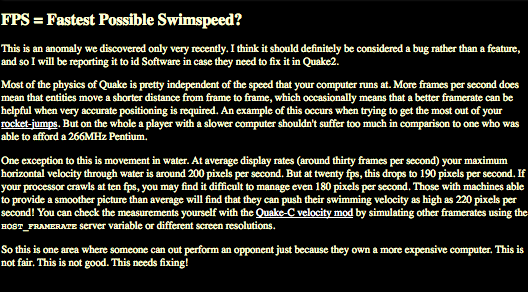 This is an anomaly we discovered only very recently. I think it should definitely be considered a bug rather than a feature, and so I will be reporting it to id Software in case they need to fix it in Quake2.

Most of the physics of Quake is pretty independent of the speed that your computer runs at. More frames per second does mean that entities move a shorter distance from frame to frame, which occasionally means that a better framerate can be helpful when very accurate positioning is required. An example of this occurs when trying to get the most out of your rocket-jumps. But on the whole a player with a slower computer shouldn’t suffer too much in comparison to one who was able to afford a 266MHz Pentium.

One exception to this is movement in water. At average display rates (around thirty frames per second) your maximum horizontal velocity through water is around 200 pixels per second. But at twenty fps, this drops to 190 pixels per second. If your processor crawls at ten fps, you may find it difficult to manage even 180 pixels per second. Those with machines able to provide a smoother picture than average will find that they can push their swimming velocity as high as 220 pixels per second! You can check the measurements yourself with the Quake-C velocity mod by simulating other framerates using theHOST_FRAMERATE server variable or different screen resolutions.

So this is one area where someone can out perform an opponent just because they own a more expensive computer. This is not fair. This is not good. This needs fixing!