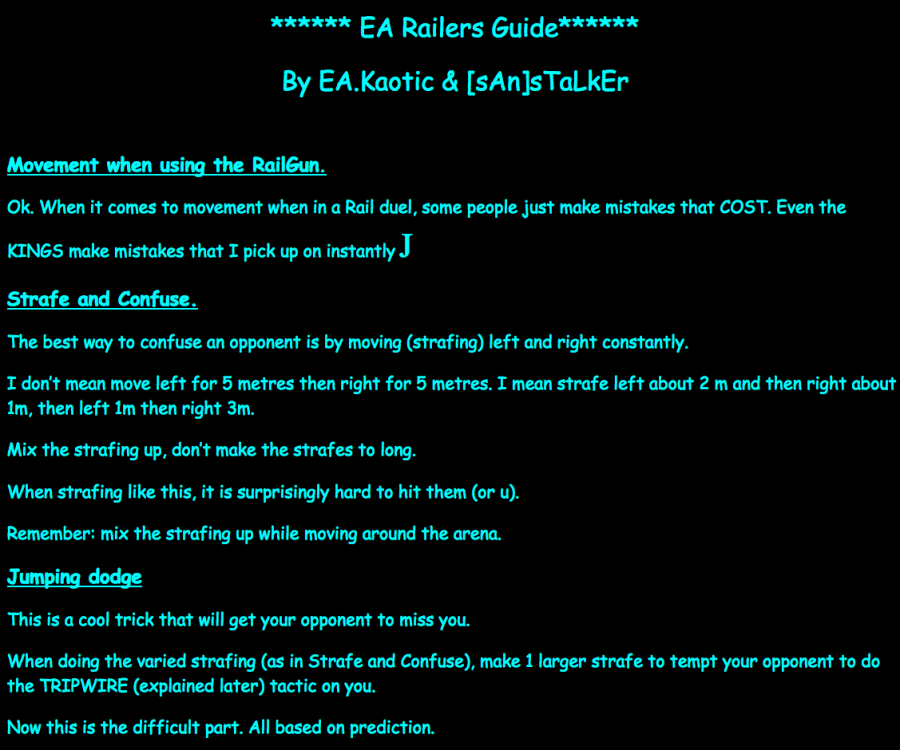 Movement when using the RailGun.

The best way to confuse an opponent is by moving (strafing) left and right constantly.

Mix the strafing up, dont make the strafes to long.

When strafing like this, it is surprisingly hard to hit them (or u).

Remember: mix the strafing up while moving around the arena.

This is a cool trick that will get your opponent to miss you.

When doing the varied strafing (as in Strafe and Confuse), make 1 larger strafe to tempt your opponent to do the TRIPWIRE (explained later) tactic on you.

Now this is the difficult part. All based on prediction.

When u think you have tempted him to fire, jump, if the opponent is a person who fires at every little slight chance of hitting you, then this can easily be predicted.

WARNING: In my opinion (if youre going to take notice of this guide) is to never, jump.

There is no need. I have played people who seem to have their finger jammed on the jump button. See the rail to jumper section to see why.

Shooting with the RailGun

Ok. Now explaining this in words is a very difficult task.

If a person is strafing left, you aim about ½ cm in front of the opponent.

With a ping of 300, which I have had on a fair few servers it goes up to about ¾ cm in front of the opponent.

The above shooting is all very well but most of the shooting actually comes with the movement.

If your opponent is strafing left, start strafing left with him and aim about ½ cm in front (all depending on ping size). Same when moving right.

Another easier tactic which i have picked up (This is NEEDED to defeat a strafing opponent) is : when an opponent is strafing left, keep your target in a centred position while strafing in the opposite direction. Shoot him at the cross over, when he crosses your target sight.

This is called the TRIPWIRE tactic.

Another way to defeat a strafing opponent is to pick a point near to where he is doing the annoying varied strafing, keep your target on that position while strafing your self.

Now if he crosses that position which your aiming at let a Slug/Rail rip. this should sort the annoying C*NT out.

I learnt this tactic from EA.Kaotic, when I got drilled a fair few times from his rail :
If an opponent is strafing from a small distance away, jump straight at them (Kamikaze tactic – according to Kaotic) and Rail them good and proper, making sure they dont get back up. J

WARNING : Be carefull when trying this tactic on LPBs as if theyre good players they have a distinct advantage up close. You can use this tactic, as they wont expect it. Just make sure you get away quick afterwards.

Kaotic recommends either running very quickly or jumping over their heads and quickly changing weapon to the RL and Rjumping away. If youre good you can often hurt them even more by rocket jumping near them so the blast radius from your rocket catches them. If you hit them with your rail this can often finish them off.

Now you will see why you should never JUMP….

If an opponent Jumps the slightest bit aim for where you think he will land (predicted this position) then shoot when he is just about to land (in Ches rail guide it said shoot when the opponent reaches his highest point, but I think thats a bit too soon)

This is such a GOOD tactic, I actually sometimes wait (while strafing and dodging) until the opponent jumps :)

And this is all thanks to the 3.17 patch which took care of the annoying air physics, which are still in Q1 L

***TO BE HONEST I LIKE PEOPLE WHO JUMP, THEY ARE EASIER TARGETS.***

I only ever jump when I think it is really necessary. In the force TRIPWIRE tactic and when in smaller areas when railing.

To also defeat an opponent who either is jumping down from a high point or falling.

If they are good enough LPBs have the luxury of being able to hit people onn the fly through the AIR, which I have found out playing the clan of LPBs KING L

But us mortals with MODEMS have to stick the tactic of hitting the opponent when they hit the ground. When the opponent hits the ground they have little control of movement, this is his most vulnerable time to kill an opponent.

I got this tactic while playing on Barrys RA2 against ++Bison++.

This is actually surprisingly difficult to hit a person when he is doing this.

What you do is stand still (doesnt sound good already J ) and when you think your opponent will fire, jump up or in a direction he would not expect. When youre in the AIR fire at your opponent.

This drove me nuts because i really could not hit him. At the end of that game he won. However I sorted him out good and proper after I had figured out how to kill the annoying little b*stard. You should use Kaotics Kamikaze tactic as this confuses the hell out of most players J

They dont expect you to jump right at them.

It is completely possible to beat an LPB with the Railgun. You have just got to play better than them. If the opponent is just as good as you, then you stand very little chance of winning. But there is always a chance.

I (kaotic) for an example have railed many of the KINGs quite a few times, yes even b0se.

If you use the above tactics you stand a much better chance of beating them than you would if you didnt use them.