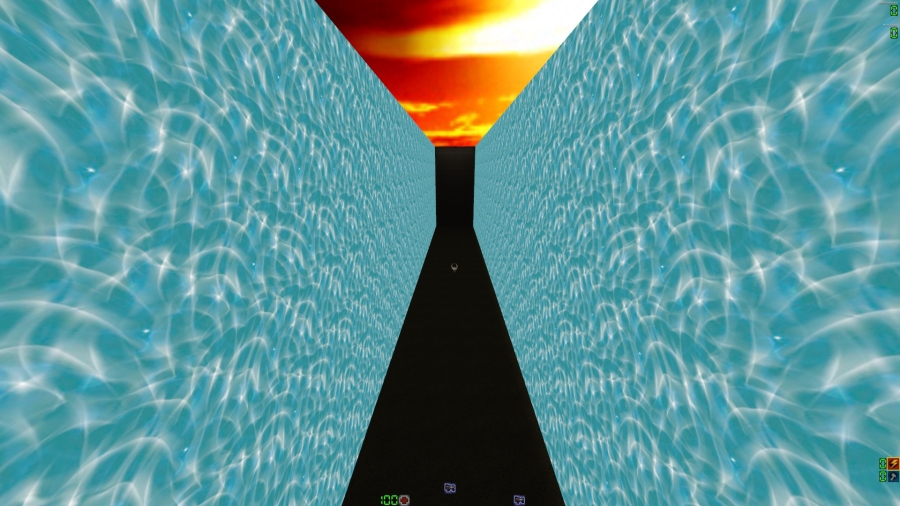 “Ugly CTF [remastered]” sa2spaz.bsp by
A rebuilt version of an old classic. 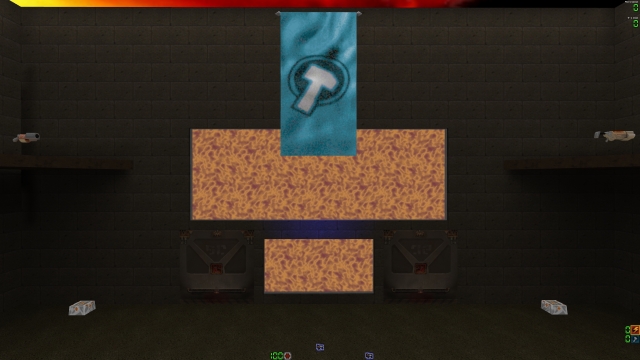 Map is available for vote on all ACME L-Fire servers.

I touched on a few days ago that I was grateful for Reefer posting Geezer’s CTF Map Making Guide because it educated me on some changes I needed to make as well as affirming some correct decisions I made in the making of this map.

One of the things I was never keen on with spazctf was the fact that all the respawn pads are in the middle of the map. I was talking with Reefer about this just recently, and I used the example of dgctf2 “Twin Castles Rush”. That map, like spazctf, has all of its respawn pads in the middle of the map. In Twin Castles Rush, it creates a situation in smaller games (1v1 and 2v2, mainly; less so as player counts go up) where a stacked player can kill an enemy, and then that enemy respawns in a location that is immediately vulnerable to attack by the same stacked player. In spazctf, this is largely mitigated by the infamous Wall of Water, which slows player movement and obscures vision. I’ve taken a further step by adding four more respawn pads that are farther from the midfield area.

That addition of extra spawns was actually the first change I would really consider as truly changing the gameplay of the map. The thing about those spawn pads is that they aren’t in the locations I originally placed them. In the hallways that lead into the bases, you reach the end of the hallway and have to U-turn into the base. Originally, the spawns were on the inside corner of these U-turns, facing the outside corner but still in the hallways. While I was still building the map, I realized this could lead to a situation where a flag carrier coming down the hallways could have a player (teammate or enemy) spawn in this location, blocking him and delaying progress. This is bad. So I moved the spawn pads to the outside corner and turned them to face the opposite direction.

A related change this required, was the addition of CTF team banners in the hallways. Originally, they were placed on the wall at the ends of each hallway, so someone spawning in the hallways would immediately know where they were. Well, I didn’t move the banners when I moved the spawns, and so up until Sunday someone could spawn in a hallway and not immediately know where they were – specifically, which base they were in. I moved the banners to the side of the hallways, above the Shotguns, which along with the also-new small health paks, were moved slightly toward the midfield area for aesthetics. I also added new banners to the side of the box towers in midfield so people spawning here would know where they were.

One thing I do feel I did right was that I made sure to set which direction all the entities that face a specific direction (ammo, health, and spawn pads) to face a pre-determined direction. For ammo and health, this isn’t a big deal – most items in Q2 either rotate (weapons and armor), or are symmetrical (most health paks). This is important for spawn pads though, because you don’t want your players to spawn facing directly into a wall or a corner. Megahealth also is an exception to this rule, because its design is only on one side.

Another correct decision I made in my own opinion, was redesigning the windows that are on the face of the flag room. I made two distinct windows, and shaped them in such a way that they appear to be built in to the brickwork of the base construction. This change was made mainly for aesthetics, but I then put clip brushes on both sides of the windows, so there aren’t any tiny corners for players to get stuck on. The doors to the flag rooms are also fully flush with the walls on which they are placed, so no chance of getting stuck on a tiny corner there, either.

That’s all I’ve really got to say about this map. I’m hoping to continue to do mapping, largely using this map as a “test bed” to learn my editing software and the techniques of map building that I can use and improve on to make more and better maps.